Report on the Right to Education in the Gali District: Novelties and Problems of 2015-2016 Academic Year

On November 4, 2015, the Public Defender of Georgia presented a special report on the Right to Education in the Gali District: New Developments and Challenges of Academic Year of 2015-2016.

According to the special report, the academic year of 2015-2016 has seen the introduction of Russian as a language of instruction for all primary school students (1-4 grades) who now have to use Russian textbooks published in the Russian Federation. The de-facto administration has decided that this will be the practice for the years to come. Therefore, if events will take the planned course, in six years the Georgian language will be exterminated from the academic processes in Gali district to be replaced by the Russian language, a culmination of processes which began in 1995.

It should be noted that most of the Gali population, including school students identify themselves as ethnic Georgians, as also indicated in so called Abkhazian passports. In spite of this, children residing in Gali district are not able to fully exercise their right to receiving school education in their native language which in turn prevents them from receiving quality education and restricts access to education in general.

The special report provides a detailed account of the facts of violation of receiving the education in the native language and restriction to the access to education, as well as the facts of discrimination and violence against children that have taken place in Gali district since 1995. The report also offers relevant legal assessments.

Protection of rights of conflict affected communities and individuals, is a guarantee of peaceful cohabitation between the confronting sides. A society where human rights and dignity are respected has better chances to progress and develop towards democracy, based on equality and economic prosperity.

Gali District communities can play an important role in normalizing Georgian-Abkhaz relations which is vitally important for the purpose of achieving peace and stability in the region. The implementation of the following measures is the important precondition to ensure the protection of rights of the local population

The state authorities engaged in the Geneva international discussions, as well as the Parliament of Georgia, should not spare political, legal and diplomatic efforts for the protection of the right to education in Gali district. Efforts should include raising this issue and the awareness of international community as well as using international legal mechanisms.

The Ministry of Education and Science of Georgia should continue to Continue to support Gali schools and their staff, improve educational programs for children and teachers in Gali schools tailored to their specific needs and develop exchange and informal educational programs for school children living in the occupied territories to address the gap in the process of receiving of general education.

In addition, engagement of international organizations is vitally important in order to ensure that protection of the right to education in Abkhazia is under constant monitoring. This would be impossible without restoration of the work of human rights organizations in Abkhazia and support to local NGOs. Protection of human rights in Gali district should be a significant component of dialogue agenda between international organizations and Georgia, Russia and de-facto authorities.

Every party responsible for the protection of human rights of Gali community including Russian Federation and Abkhaz de-facto authorities are obliged to take all measures to ensure the enjoyment of the right to education and free movement of students in Gali district so that the latter can receive education in a safe environment and conditions that are acceptable to them. For this to happen the parties must take specific measures including alleviation of barriers hindering students’ movement across the ABL, ensure the access of the Gali community to education in their native language, terminate discriminatory and assimilative policies and instead reintroduce Georgian as the language of instruction in schools in Gali District and reinforce teaching of Abkhaz language and culture. In addition, support must be rendered to international and human rights organizations to work in Abkhazia.

The presentation of the special report was attended by the representatives of international missions, the Ministry of Education and Science, the Office of the State Minister for Reconciliation and Civil Equality, the Government of the Autonomous Republic of Abkhazia and the media.

The Right to Education in Gali District: New Developments and Challenges of the Academic Year of 2015-2016. 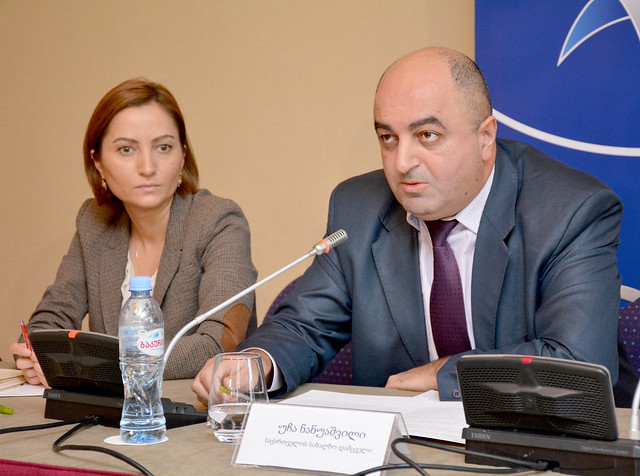