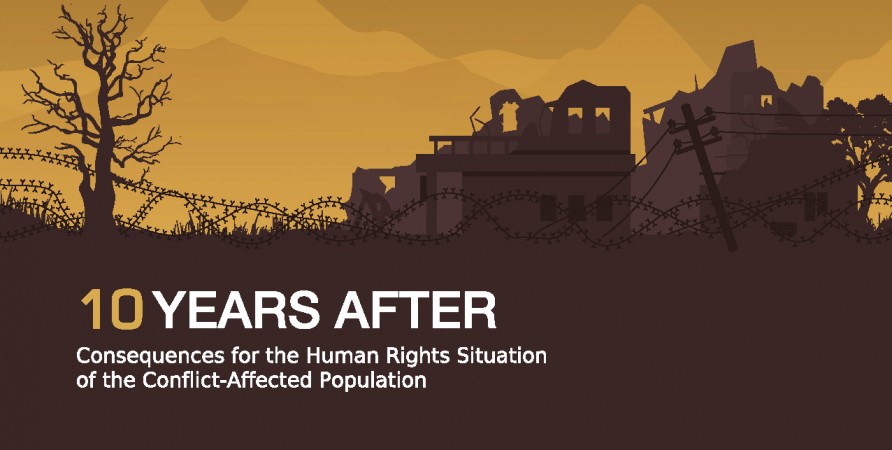 Ten years have passed since the tragic events of 2008. The war was a severe blow to Georgia's political, economic and democratic development. The conflict harmed relations between people, relatives and friends. Today the border guards of the Russian Federation illegally detain and fine people at places of intensive movement and trade 10 years ago. According to the Russian and de-facto authorities, the number of persons detained on the occupation line of Abkhazia amounted to 15 000 in 2009-2017 and the number of detainees on the occupation line of the Tskhinvali region was 1 063 in 2016-2017. Cases of deprivation of life have also occurred on the occupation lines.

The conflicts in the 90s and 2008 affected more than half a million people. 278 103 out of them became internally displaced persons. 20% of the territory of Georgia is occupied. These figures indicate the challenges faced by our country and the huge responsibility of the central government.

The general analysis of the IDPs' rights situation shows that their main problems remain the same over the years. 58% of the registered IDPs are still waiting for a shelter. In some facilities, IDPs have to live in difficult conditions; former collective centers have been poorly rehabilitated and repaired; the social and economic situation remains a challenge.

In order to realize the rights of internally displaced persons, the Public Defender considers that the following should be necessarily done: 1. Priority should be given to resettlement of IDPs from the facilities that threaten their lives or health; 2. A model focused on IDPs’ needs should be developed.

The rights situation of people living along the occupation lines has worsened after 2008. The 350 km-long occupation line of the Tskhinvali region is controlled by 1 200 border guards of the Russian Federation and the 145 km-long dividing line of Abkhazia is controlled by 1 500 border guards. Erection of barbed wire fences directly damaged more than 50 villages of Shida Kartli and Samegrelo-Zemo Svaneti regions on the Georgian-controlled territory.

Locals daily face unlawful detentions, military exercises at the bases of the Russian Federation, the problem of drinking and irrigation water, as well as the poverty caused by the loss of agricultural lands as a result of the occupation.

In 2016-2018, two Georgian citizens, Giga Otkhozoria and Archil Tatunashvili, became victims of illegal actions of de facto law-enforcement agencies when they were passing checkpoints fully controlled by the border troops of the Russian Federation. Therefore, the Russian Federation, as a country exercising effective control on the occupied regions, is directly responsible for the violation of the Georgian citizens’ right to life.

In order to realize the rights of the population living along the occupation lines, the Public Defender believes that it would be reasonable to: 1. Develop entrepreneurial and agricultural programs tailored to the needs and opportunities of conflict-affected communities; 2. Take effective steps to rehabilitate the houses damaged by the war on the Georgian-controlled territory and/or to compensate for the damages.

Recognition of the independence of Abkhazia and the Tskhinvali region by the Russian Federation and strengthening of Russian control over these regions worsened the rights situation of persons living in the occupied territories. The quality of health and education is worsening from year to year, nepotism and corruption are widespread, population is totally vulnerable to authoritarian ruling and free expression of opinion is regarded as "betrayal of the homeland". Civil society organizations and their members are under constant pressure.

The Georgian population of the occupied territories is persecuted on grounds of ethnicity; their freedom of movement and freedom of expression are restricted; the right to get education in their native language, as well as property rights, is violated; their ID documents remain problematic, etc.

The case of Tamar Mearkishvili, an activist in Akhalgori, which was responded by Public Defender’s several public statements, should be especially underlined. Her persecution should be assessed as a restriction of freedom of expression and persecution on ethnic grounds. The Public Defender urges the government to pay particular attention to Tamar Mearkishvili in terms of improving her and her family’s rights situation and social conditions.

The Public Defender welcomes any initiative of the Government of Georgia aimed at protecting the rights of the population living in the occupied territories and building trust between the communities split by conflicts. To achieve this goal, it is necessary to:

It is impossible to restore violated rights without political will. The Public Defender urges all parties to launch result-oriented dialogue to improve the social situation of the conflict-affected population, protect their dignity and rights, change attitudes between opposing communities and heal the wounds of the war.