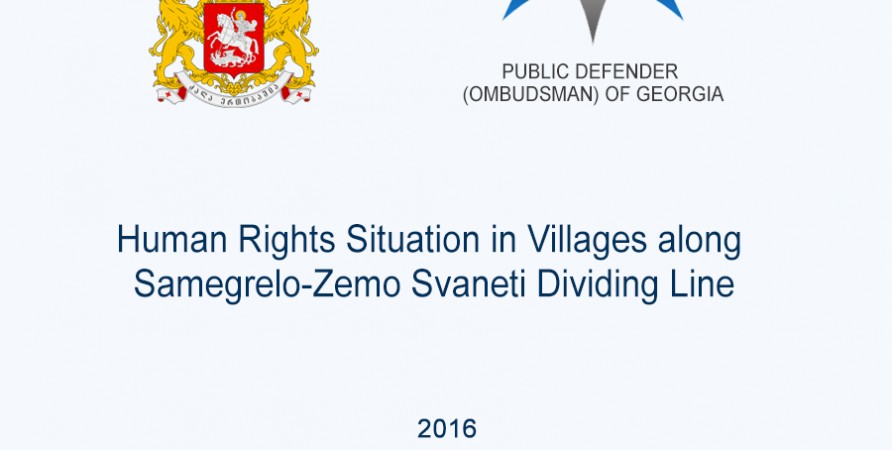 The special report include the socio-economic and security situations of people living along the dividing line between Samegrelo and Abkhazia, and reviewed the human rights situation of the populations of the villages of Khurcha, Pakhulani and Tskou.

The village of Khurcha of the Zugdidi municipality borders the village of Nabakevi of the Gali district. The village has been directly affected by violent conflicts several times. Khurcha is the only village on the other side of the Enguri River, which is controlled by Georgia. The Georgian police checkpoint is located at the beginning of the village and this creates safety problems for the rural population. A clear example of this was the murder of 22-year-old G.O. at the Khurcha-Nabakevi checkpoint on May 19, 2016. The Public Defender considers it important that the case be quickly and efficiently investigated through cooperation between the parties and the offender be punished, which would strengthen the sense of safety of the local population and create an important precedent of cooperation.

Illegal arrests on charges of "illegal border crossing" are frequent in the village of Khurcha, as well as other villages along the dividing line. Residents of Khurcha and Gali, including school children, have been among the detainees over the years.

Residents of the village of Khurcha demand full compensation for the loss suffered during the hostilities of 1993-1998 and 2008.

The Russian border guards erected wire fences in the Tsalenjikha villages of Pakhulani and Tskou in 2013, after which several houses of the village fell on the uncontrolled territory. The wire fences were erected in the agricultural lands of the village population and thus their access to the land has been restricted.

The absence of a bridge in the village of Pakhulani, connecting several districts of the village with each other, remains a problem. Also, the banks of the Ilori River need to be fortified, as during rainfall the swollen river floods agricultural lands.

The Public Defender prepared recommendations for relevant agencies in order to ensure protection of the rights of conflict-affected population and solution to the problem of social infrastructure in the villages along the dividing line.