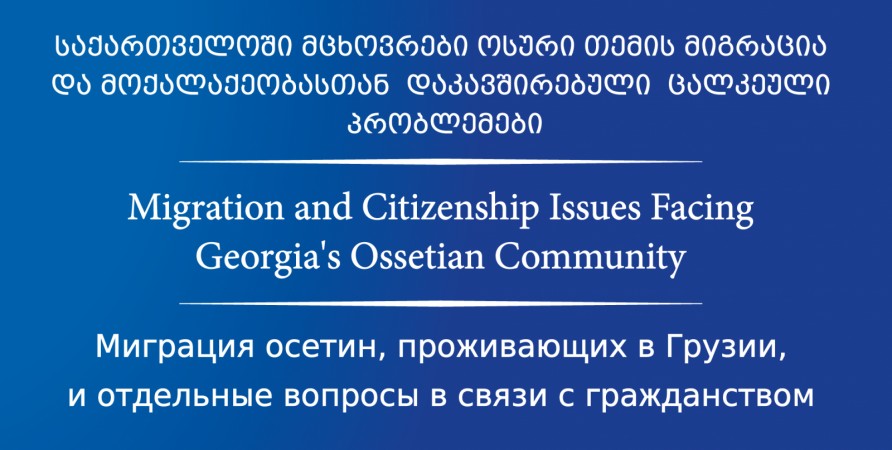 In accordance with its competences granted by the Constitution of Georgia, one of the top priorities of the Public Defender’s Office is to ascertain and monitor the rights of persons in conflict-affected communities.

In January 2014 the Ossetian Forum, a consultative council, was set up at the Public Defender’s Office. The Forum functions as a communications hub for the members of Georgia’s Ossetian community, Tbilisi based NGOs, regional activists, educators and representatives of culture and the arts. The goal of the Ossetian Forum is to eliminate the negative consequences of past conflicts and ongoing tensions, protect the rights of those who have been affected by military actions and protect the rights of Georgia’s ethnic Ossetian citizens, including their ethnic identity and cultural rights.

For the purpose of achieving the objectives mentioned above, the Ossetian Forum has contributed to a research study conducted by the Public Defender’s office concerning migration and citizenship issues faced by Georgia’s ethnic Ossetian community. The goal of the research was to study cases of rights violations occurring as a result of the 1989-1992 war and lingering ethnic tensions, as well as to develop recommendations for the restoration of those rights. The research highlights the State’s responsibility to ensure restoration of justice and rights based on its international obligations to protect human rights in the country. That includes the State’s responsibility to respond to past violations.

Although both Georgian and Ossetian communities were affected by armed conflicts, the study focuses on the Ossetians who at the time of the 1989-1992 conflict resided on Georgian government controlled territory and were severely affected by the conflict.

Highly undesirable migratory trends affecting Ossetian-populated villages in Georgia are coupled with legal and practical barriers currently imposed on Georgia’s ethnic Ossetian residents. More specifically, some of the Ossetians living in Georgia hold Russian citizenship, which means that their Georgian citizenship is automatically terminated. This factor forces them to choose between Russian and Georgian citizenship.