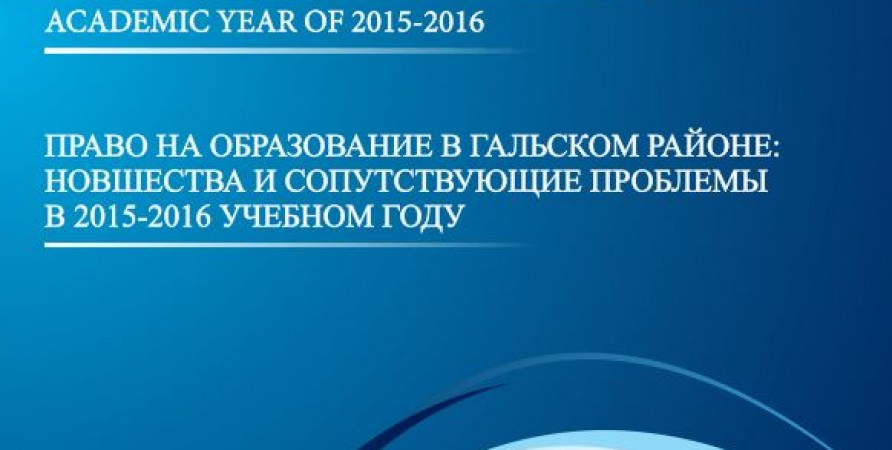 The Right to Education in Gali District: New Developments and Challenges of the Academic Year of 2015-2016

The special report of the Public Defender of Georgia outlines facts of violation of the right to education, discrimination and violence against children in Gali District as of 1995 and provides a legal assessment to these fact.

The academic year of 2015-2016 has seen the introduction of Russian as a language of instruction for all primary school students (1-4 grades) who now have to use Russian textbooks published in the Russian Federation. The de-facto administration has decided that this will be the practice for the years to come. Therefore, if events will take the planned course, in six years the Georgian language will be exterminated from the academic processes in Gali district to be replaced by the Russian language, a culmination of processes which began in 1995.

It is worth noting that most of the Gali population, including school students identify themselves as ethnic Georgians, as also indicated in so called Abkhazian passports. In spite of this, children residing in Gali district are not able to fully exercise their right to receiving school education in their native language which in turn prevents them from receiving quality education and restricts access to education in general.

Protection of rights of conflict affected communities and individuals, is a guarantee of peaceful cohabitation between the confronting sides. Gali District communities can play an important role in normalizing Georgian-Abkhaz relations which is vitally important for the purpose of achieving peace and stability in the region. The implementation of the following measures is the important precondition to ensure the protection of rights of the local population:

Ministries and state bodies participating in Geneva International Discussions, as well as the Parliament of Georgia should ake all political, legal and diplomatic efforts to protect the right to education of Gali residents. Efforts should include raising this issue and the awareness of international community as well as using international legal mechanisms.

In order to protect the right to education for Gali community it is important that international human rights organizations be actively involved in the processes and keep the issues related to the protection of the right to education in Abkhazia under constant spotlight. Efforts must be made to restore the representation of international human rights organization in Abkhazia, including through the dialogues with the Russian Federation and Abkhaz de-facto authorities. International organizations, upon their mandate, should also support human rights groups including those working in Gali district and make the protection of human rights in Gali a significant component of dialogue agenda between Georgia, Russia and de-facto authorities.

Every party responsible for the protection of human rights of Gali community including Russian Federation and Abkhaz de-facto authorities are obliged to take all measures to ensure the enjoyment of the right to education and free movement of students in Gali district so that the latter can receive education in a safe environment and conditions that are acceptable to them. For this to happen the parties must take specific measures including alleviation of barriers hindering students’ movement across the ABL, ensure the access of the Gali community to education in their native language, terminate discriminatory and assimilative policies and instead reintroduce Georgian as the language of instruction in schools in Gali District and reinforce teaching of Abkhaz language and culture. In addition, support must be rendered to international and human rights organizations to work in Abkhazia.

The Right to Education in Gali District: New Developments and Challenges of the Academic Year of 2015-2016