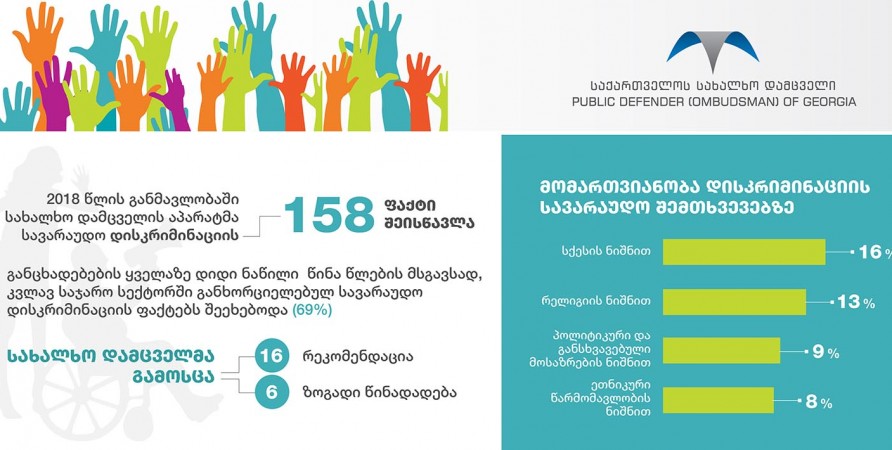 By singing the Association Agreement with the European Union in 2014, Georgia undertook gradual approximation with its legislation with the EU law and on 2 May 2014, the Parliament of Georgia adopted the Law on Elimination of All Forms of Discrimination (anti-discrimination law). The aim of the law is to eliminate all forms of discrimination and to ensure equitable enjoyment of rights enshrined in the Georgian legislation by any physical or legal person. The court and the Public Defender of Georgia have been tasked to eliminate and supervise discrimination.

During 5 years, the main function of the Public Defender's equality body was to study individual cases, identify systemic problems relating to discrimination and spread information about equality issues through educational activities.

The Public Defender has studied about 650 applications for these 5 years, conducted informational meetings/trainings with schoolchildren, teachers, journalists, employees of the Ministry of Internal Affairs and the Prosecutor's Office, representatives of private companies and various public servants. In addition, for the purpose of establishing good practice and establishing correct standards in relation to the right of equality, up to 20 amicus curiae briefs were filed with common courts. In addition, the Public Defender carried out a third party intervention in a case considered by the European Court of Human Rights, by which the Public Defender provided information about the situation of equality of women in Georgia.

The adoption of the anti-discrimination law in Georgia is an important human rights event, however, the ombudsman's practice soon revealed the financial and procedural-legal shortcomings that hampered the implementation of the normative framework in practice, which was indicated in a special report by the Public Defender in 2015. As a result of repeated recommendations of the Public Defender, harassment and sexual harassment were regulated as forms of discrimination in February 2019.

It is also symbolic that the Parliament of Georgia supported the strengthening of the Public Defender's mandate in relation to private individuals on 1 May 2019, which implied the obligation of provision of information to the Public Defender and creation of a mechanism for implementation of recommendations.

According to the Public Defender, one of the main achievements of the anti-discrimination law is the increased public awareness and discussions about discrimination as a social phenomenon, which facilitates the creation of a tolerant environment towards vulnerable groups.

Unfortunately, there still are a lot of challenges in the process of achieving equality, which is mainly related to the problem of effective implementation of the legislative framework in practice and the stereotypes which are still strong in the society. According to the Public Defender, effective struggle with existing challenges requires involvement of all stakeholders - government, civil sector, international partners and coordinated cooperation.