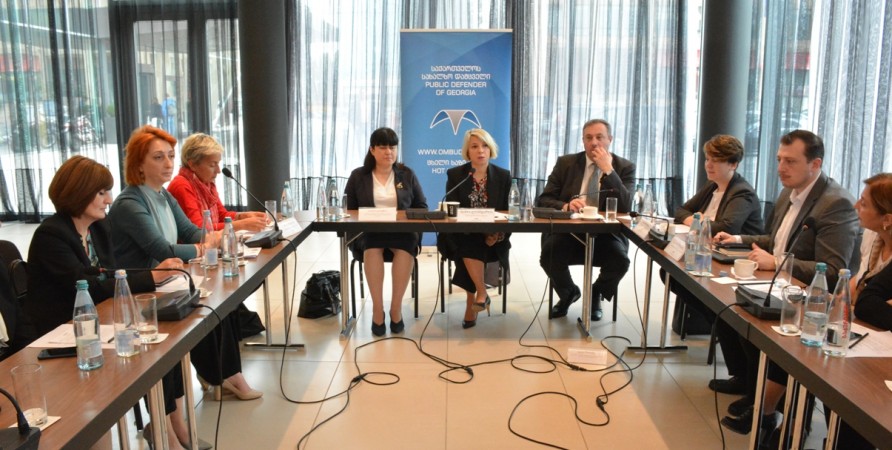 On 10 October 2019, on the occasion of the World Mental Health Day, Public Defender of Georgia Nino Lomjaria held a public meeting on mental healthcare and human rights.

The World Mental Health Day has been marked since 1992 and aims to raise public awareness of mental health issues and to mobilize supportive activities. This year's focus is suicide prevention.

Despite the alarming statistics, the state has hardly taken necessary preventive steps. No suicide prevention programme has been approved yet, even though its adoption and implementation was to be carried out in 2016, according to the state action plan.

In her welcome speech, the Public Defender spoke about the lack of awareness of mental health and the taboo in the society. She emphasized the need for the state to take complex and consistent measures and the importance of ensuring a high standard of human rights protection in the process. The Public Defender noted that despite the increase in the budget of the State Mental Health Programme, community-based and psychosocial rehabilitation services are insufficient; continuity of service and lack of human resources are also problematic. She named the following as the major challenges: identification and proper management of mental and behavioral disorders caused by the use of various psychoactive substances; inadequate infrastructure and living conditions in most of the inpatient psychiatric institutions; problems with access to somatic health services. The lack of deinstitutionalization strategy in the field of mental health was also evaluated negatively.

“We have been demanding transition to community-based services for a long time. Unfortunately, we have services intended for long-term inpatient treatment in Georgia, where patients spend their entire life. They do not have enough skills to live independently, they cannot leave institutions and their families also refuse to accept them. It is difficult to identify mental and health problems at the early stage and to treat them. Only 37% of patients were involved in treatment after hospitalization last year. This is a field that receives less attention by the state,” Nino Lomjaria said and urged state agencies to step up efforts to improve mental healthcare, including in the direction of suicide prevention.

Speeches were also delivered at the meeting by Akaki Zoidze, Chairman of the Committee on Health Care and Social Issues of the Parliament of Georgia, and Tamar Gabunia, Deputy Minister of IDPs, Labour, Health and Social Affairs.

Monitoring showed that outdated infrastructure, overcrowding and poor sanitation are still problematic in the Eastern Georgia Mental Health Center (Bediani Psychiatric Clinic). In addition, it should be noted that the beneficiaries of the clinic are not protected from ill-treatment.

The use of physical and chemical restraint methods, lack of timely and adequate treatment of somatic diseases, lack of appropriate psychosocial rehabilitation and support services, prolonged hospitalization, and involuntary medical intervention are also challenges, as well as the issue of appointing support persons and managing the social package.

A visit to Ltd Acad B. Naneishvili National Mental Health Center highlighted the problem of protecting beneficiaries from ill-treatment, especially during the use of physical and chemical restraints, as well as the quality of care and treatment, which is aggravated by staff shortages and their low qualifications, patient’s informed consent and involvement in services, use of antipsychotic medications.