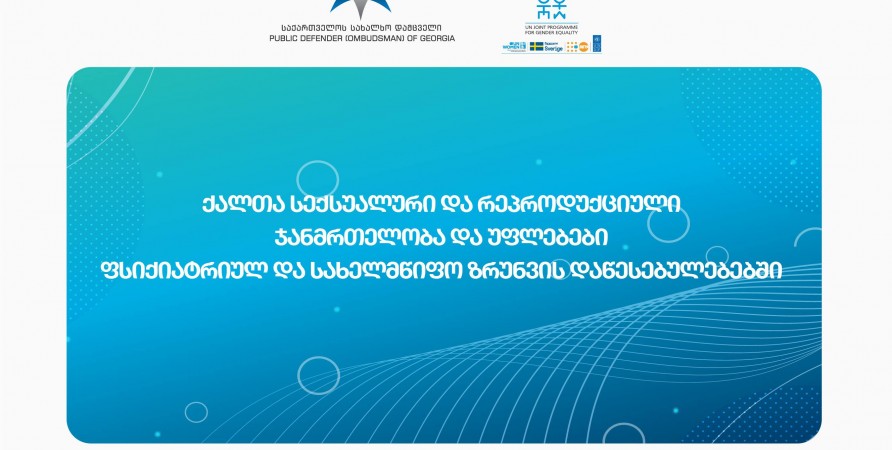 On July 13, 2020, the Public Defender of Georgia held an online presentation of the special report - Situation of Women's Sexual and Reproductive Health and Rights in Psychiatric and State Care Institutions.

The report relies on the results of the monitoring conducted in 12 psychiatric inpatient facilities, 3 boarding houses for persons with disabilities and 6 community organizations. The report outlines the challenges in the mentioed area.

"The systemic problems faced by female beneficiaries of psychiatric and public care facilities in terms of exercising their sexual and reproductive health and rights have been studied for the first time in Georgia," - Public Defender Nino Lomjaria said in her opening remarks.

"Support for sexual and reproductive health and rights is a top priority for the United Nations Population Fund. As a result of our many years of cooperation with the Public Defender, we have taken a number of effective steps to ensure that all women in Georgia have access to the services that are vital to their lives. The study that we’ve presented today highlights the existing problems and clearly shows the directions in which efforts need to be strengthened,” said Lela Bakradze, Head of UNFPA Georgia Country Office.

In her welcoming speech, Tamar Gabunia, Deputy Minister of IDPs from the Occupied Territories, Labour, Health and Social Affairs of Georgia, emphasized the importance of protecting sexual and reproductive health and rights in psychiatric and public care institutions. She expressed readiness on behalf of the Ministry to respond to the findings of the report by making immediate decisions, as well as pursuing long-term policies.

Nino Valikova, an employee of the Public Defender's Office, and experts Lela Shengelia and Marine Kuratashvili presented the findings of the report.

According to the report, the following trends have been identified:

The Public Defender hopes that the relevant agencies will take into account the recommendations developed as a result of the study, which will significantly improve the rights situation of women in psychiatric and state care institutions.

The report was prepared with the support of the United Nations Population Fund (UNFPA) within the framework of the UN Joint Programme on Gender Equality, which is funded by the Government of Sweden.