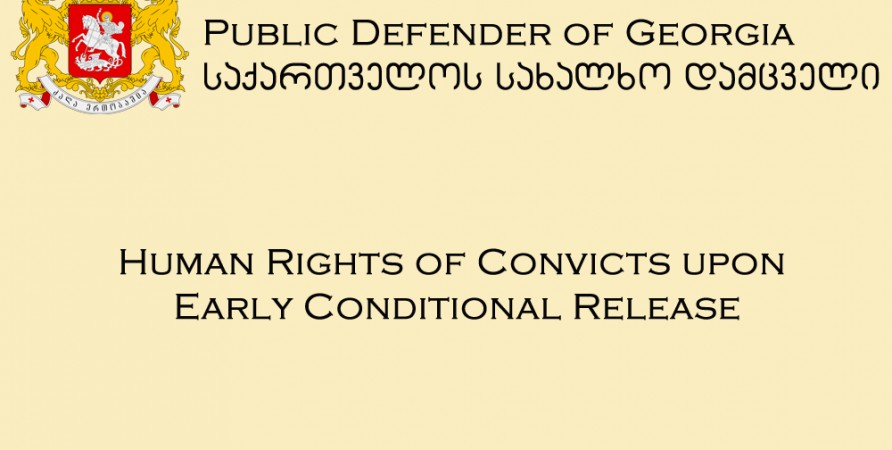 The Public Defender’s Office, for the period from January 2013 to October, examined 60 decisions of the East Local Council for early condition release of the Ministry of Corrections and Legal Assistance of Georgia, and Tbilisi City Court’s 188 judgments (on determination of deficiencies) and 20 decisions.

The Public Defender of Georgia positively evaluates a significant increase of the early conditional release of a convict from serving a sentence over the last year and a half. However, trends identified in the applications lodged with the Office of Public Defender, created a need to study cases of the early conditional release of convicts from serving a sentence, also degree of validity of the Local Council’s decisions in cases of rejection.

Criminal Code of Georgia stipulates early release of convicts, with every prisoner being entitled to early re‐ lease in the cases and according to the rules defined by law.

The number of convicts addressing Public Defender’s Office (PDO) to appeal against the decisions of the Local Councils of the Ministry of Penitentiary, Corrections and Legal Assistance of Georgia (Local Councils) on early conditional release cases had been increasing throughout 2013. 2 They mainly appealed against bias and in‐ consistency of the Local Council decisions, and inefficiency of the early release review process.

As a result of the examination of 60 Local Council decisions, 20 Tbilisi City Court decisions and 188 judge‐ments, PDO has revealed the existing gaps in this field. Due to the existing shortcomings alleged violations of inmates’ rights take place not occasionally but on regular basis. Elimination of such violations requires chang‐ es both in legislation and practice.

In this Special Report Public Defender of Georgia reviews legal obligations of the State institutions, highlights established functional practices of those institutions, presents the issues existing in terms of early release of inmates, identifies shortcomings of the Local Council decisions, reviews the alleged violation of the right to access to court during the deliberations on early release, as well as the problem of unsubstantiated decisions by general courts; it also presents legal analysis of the problems and issues specific recommendations for respective institutions.