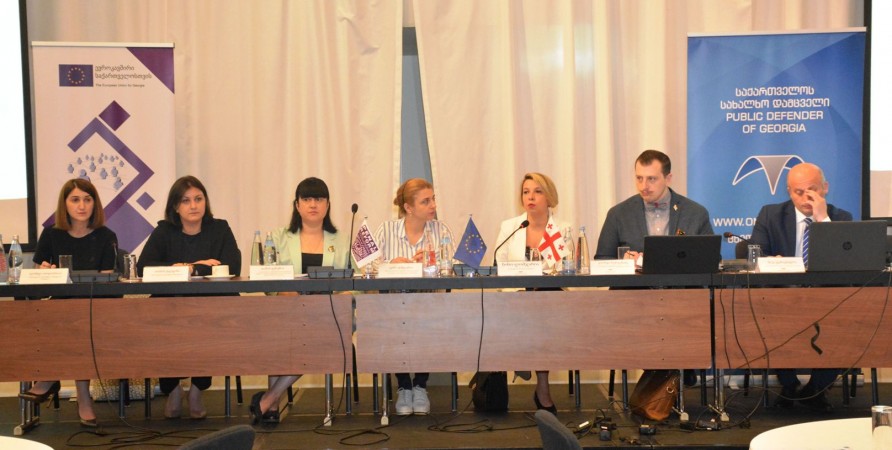 On 26 June 2019, the Public Defender of Georgia presented two special reports in connection with the International DayinSupport of Victims of Torture: (1) Report of the National Preventive Mechanism 2018; (2) Report on the Effectiveness of Investigations into Criminal Cases of Ill-treatment".

The event was organized within the framework of the EU-funded project "Promotion and Monitoring of Penitentiary and Probation Reforms with the Engagement of Civil Society". The project is being implemented by the Penal Reform International together with partner organizations - Rehabilitation InitiativeforVulnerable Groups and Human Rights Center.

1) The Report of the National Preventive Mechanism 2018 reflects the situation of torture and ill-treatment at palces of deprivation and restriction of liberty. The role of the national preventive mechanisms in the implementation of the torture prevention mandate under the the Optional Protocol to the Convention against Torture and Other Cruel, Inhuman or Degrading Treatment or Punishment was discussed at the event.

Implementation of several recommendations and development of an action plan (2019-2020) for the development of the penitentiary system were positively evaluated in the direction of the penitentiary system. Nevertheless, a considerable number of recommendations issued by the Public Defende in 2017, which were aimed at strengthening procedural and institutional safeguards against torture and ill-treatment, remains unimplemented. Criminal subculture, which creates a serious threat to the ill-treatment of prisoners, was underlined as a seruius challenge. Other topics of discussion were the practice of placing prisoners in the de-escalation room for a long time, lack of justification of the use of security measures, lack of rehabilitation measures, overcrowded facilities and problems relating to the physical environment.

The Public Defender welcomed the implementation of several recommendations by the Ministry of Internal Affairs. She also praised the increase in the number of temporary detention facilities equipped with medical units in 2018, as well as equipment of all police departments, division and stations with video cameras.

However, the non-implemented recommendations of the Public Defender include the one pertaining to the equipment of all rooms, where prisoners spend time, with cameras. In addition, according to the Preventive Group, it is necessary that the safeguards against ill-treatment (notifying family members, lawyers, consulates; explanation of rights, etc.) be properly and consistently implemented. Despite the fact that the Public Defender's Office has been less addressed with regard to violence committed by police in 2018, the number of damages suffered by the detainees after detention has almost doubled throughout the country.

The rehabilitation of the Surami Mental Health Clinic should be noted positively, but despite this, the mental health care sector requires significant fundamental reforms. The measures taken to eliminate problems in the field of mental health care are not enough; beneficiaries cannot get proper assistance. Infrastructural projects are only being partly carried out and there is no progress in the direction of health care services. Qualifications and number of the personnel are low, medicines are of poor quality, forms of treatment are outdated. Neither strategy nor action plan of deinstitutionalization has been developed. No community services have been developed, which results in the overcrowded facilities.

The Public Defender has been talking about the ineffective investigation of cases of ill-treatment for years and we have been hearing one and the same thing about the cases – “investigation is pending”. The society cannot see much result and consequently they lose confidence in this process and the investigating authorities in general.

The present report provides analysis of 38 criminal cases. Investigations in all these cases ended without any result, nobody has been charged; investigations were terminated so that none of the alleged victims had been recognized as a victim.

Institutional independence of investigation is often a serious problem. Despite the obligation of the Prosecutor's Office to carry out investigation, this request has not been fulfilled in many cases. The agencies, employees of which were suspected of ill-treatment, were actively involved in the investigation.

In spite of the legislative request regarding the launch of investigation as soon as information is received about the crime, investigations were not immediately launched in 26 cases. In some cases, investigation was launched unreasonablly late (several months later in many cases), which naturally can serve as a substantial hindrance in the process of obtaining evidence.

In most cases, investigations were not oriented to obtaining neutral evidence; identification procedure or examination of the crime scene was not carried in any of the studied cases. Relevant video recordings were hardly ever obtained; no secret investigative activity was conducted in any of the studied cases; no special protection measure was taken in relation to victims. No security measures were taken in any of 12 cases and the alleged victim of ill-treatment was left under the control of the prison administration (alleged perpetrator). None of the public servants, who allegedly committed offence, was dismissed; specific investigative actions were conducted only in one case, after it was requested by the victim.