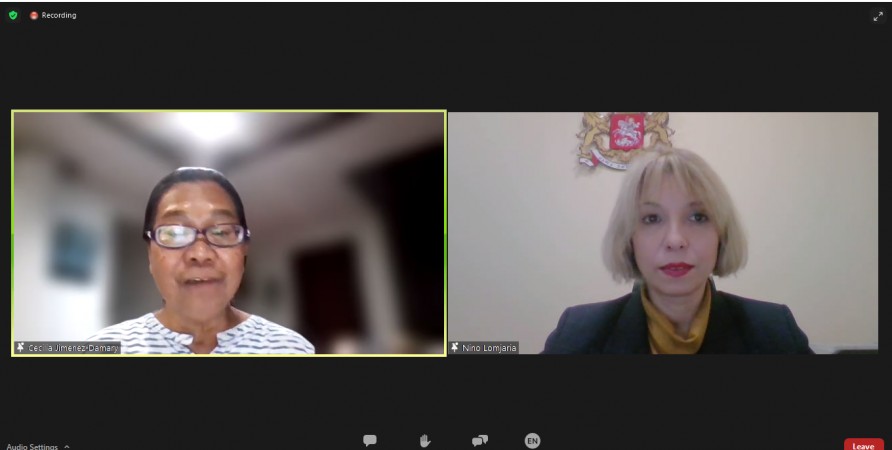 On February 9, 2022, the Public Defender of Georgia participated in an international online event, where a Handbook for National Human Rights Institutions (NHRI) for Protecting Internally Displaced Persons (IDPs) was presented and discussed.

The handbook was developed jointly by the Office of the United Nations High Commissioner for Refugees (UNHCR), Special Rapporteur on the human rights of IDPs, Global Alliance of National Human Rights Institutions (GANHRI) and United Nations Development Programme (UNDP). The handbook presents key legal and policy standards related to the protection of IDPs, analyzes the role and activities of NHRIs in the protection of the rights of IDPs, and provides an overview of good practices.

The Public Defender’s Office was actively involved in the development of the document and it is cited in the handbook as one of the National Human Rights Institutions with the best practices in the protection of internally displaced persons.

It was noted at the event that the handbook aims to help NHRIs to fulfill their mandates and stand up for human rights, including those of internally displaced persons.

Opening remarks were delivered at the event by Gillian Triggs, UNHCR Assistant High Commissioner for Protection, and Carlos Ernesto Camargo Assis,GANHRI Chairperson and Ombudsman of Colombia.

Nino Lomjaria, Public Defender of Georgia, spoke about the rights situation and major problems of internally displaced persons in Georgia. According to her, internal displacement has been a challenge in the country for 30 years, a result of the wars of the 1990s and 2008 in the Autonomous Republic of Abkhazia and the Tskhinvali region, and the country has 286,811 IDPs, representing about 6% of the total population. Unfortunately, Georgia has one of the highest rates of IDPs in the world.

The Public Defender also spoke about the issue of resettlement of IDPs, noting that by the end of 2020, the State had resettled only 41,263 families, while 49,598 families were still awaiting resettlement. She also stressed that according to official data, more than 2,000 families live in unstainable buildings that are hazardous for life and health.

Nino Lomjaria informed the participants about the activities of the Public Defender’s Office in the direction of the protection of the rights of IDPs and reviewed examples of direct support to IDPs, including by providing legal aid and considering individual complaints.