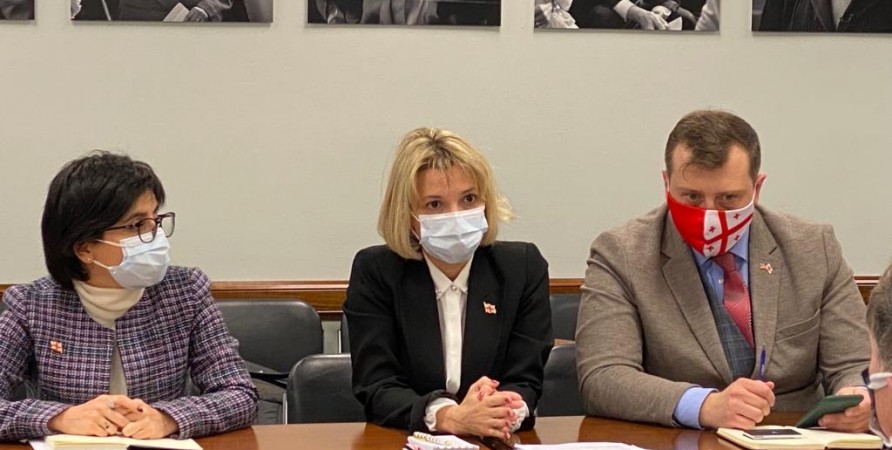 Public Defender’s Official Meetings in US

Public Defender Nino Lomjaria held meetings in the US House and Senate, Department of State and Department of Justice as part of her official visit to Washington. Meetings were also held with representatives of the International Republican Institute (IRI), National Endowment for Democracy (NED), Freedom House and United States Agency for International Development (USAID).

The purpose of the visit was to provide information on the human rights situation in Georgia to the representatives of Georgia's main strategic partner, in order to achieve future improvement and progress through their involvement and assistance. The challenges faced by the Public Defender of Georgia as a constitutional body and cases of attack were also discussed during the meetings.

The Public Defender of Georgia paid special attention to the challenges relating to the realization of the right to vote and the violations identified during the recent elections, systemic and individual shortcomings in the judiciary, problems in the field of equality, illegal covert surveillance and questions relating to the cases investigated by the Georgian Prosecutor's Office.

The Public Defender of Georgia called on all relevant actors to provide maximum assistance to the media and civil society representatives within their powers and capabilities. The need to take steps to unify Georgian society and reduce political polarization was also stressed.

The Public Defender of Georgia hopes that her visit to the United States of America will help better ensure human rights standards in Georgia. Progress has been made in a number of areas with the help of American partners and we hope that we will be able to make progress in a variety of areas with their assistance in the future too.

The Public Defender met with the Deputies of the Assistant Secretary, ErikaOlson and Kara MacDonald. A meeting was also held at the Department of Justice.

In the legislative body, meetings were held with Congressman David Price, staff members of Senators - Shaheen, Cardin, Johnson, Menendez and Risch - and staff members of the House Foreign Affairs Committee. A separate meeting was held with representatives of the Helsinki Commission.

The Public Defender of Georgia also held meetings with important international organizations working on Georgian issues, including with the Acting Vice President of the National Democratic Institute (NDI), Nicole Rowsell. An important meeting was held with Damon Wilson, Director of the National Endowment for Democracy, and problems and challenges in the field of human rights were discussed. Issues relating to the media and democracy were discussed with Sofya Orloski, Freedom House Deputy Director for Europe and Eurasia Programmes. Election issues were the main topics of discussion with the Eurasia Programme Director at the International Republican Institute.