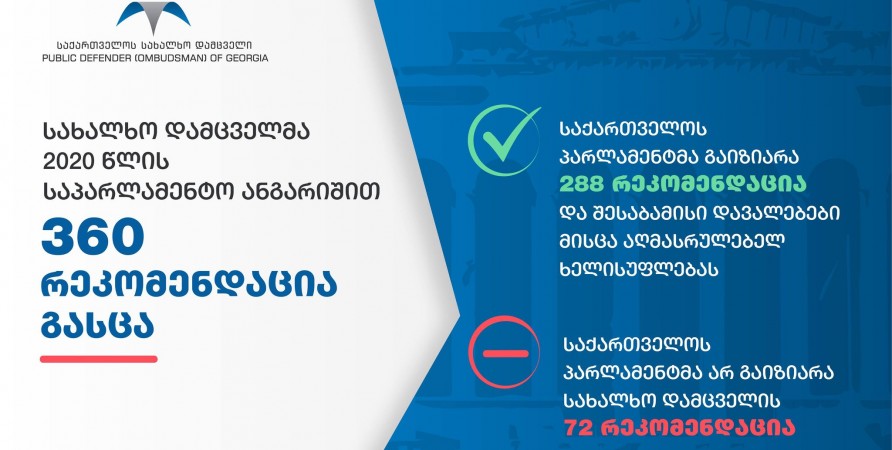 As for the topics of the Public Defender's recommendations, which were not reflected in the resolution, the trend in this regard is similar to previous years. The main part of recommendations not endorsed by the Parliament of Georgia again concern the rights situation of the LGBT+ community, education on sexual and reproductive health and rights, protection of school students from religious indoctrination, religious neutrality of state agencies, etc. The resolution did not endorse the Public Defender’s recommendations calling on the law enforcement agencies to ensure a high degree of transparency either. For example, equipping law enforcement officers participating in special operations with body cameras, installing surveillance cameras in all places of police departments, divisions and stations, where a detainee, a witness or a person voluntarily invited for an interview may be present, etc.

The Public Defender calls on the Parliament of Georgia to strengthen the parliamentary oversight mechanisms in the process of monitoring the implementation of binding tasks assigned by it, and in turn expresses her readiness to cooperate with state agencies in all formats, in order to fully implement the tasks issued by the Parliament.

[1] The recommendation endorsement rate may be slightly corrected by the Public Defender's Office after communication with state agencies and analyzing information received from them. The updated data will be reflected in the Public Defender’s Special Report on the Fulfillment of Tasks Set out in the Resolution (No. 710-V rs-X MP) of July 12, 2021, which will be drawn up according to the reporting period in 2022.