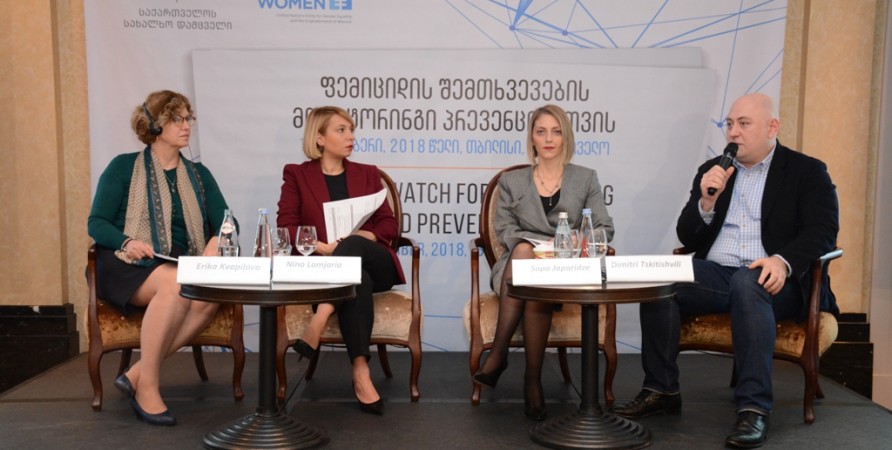 On 15 November 2018, the Public Defender of Georgia, with the support of UN Women, organized an International Conference on Monitoring Femicide for Prevention. Femicide, as a systemic problem and extreme form of violence against women, and its prevention were discussed at the conference.

At the opening of the conference, Public Defender Nino Lomjaria talked about the increased rate of domestic violence, noting that domestic violence was the cause of murders of women, attempted murders and suicides in 31 cases in 2017 alone. According to the Public Defender, substantial changes in the direction of prevention of femicide is prevented by the lack of economic independence of women on the one hand and by wrong assessment of risks and delayed response of the law enforcement agencies on the other hand. It is important that in 2018, the Ministry of Internal Affairs of Georgia introduced a risk assessment methodology in relation to the cases of domestic violence and violence against women on the basis of the Public Defender’s recommendation, which will later enable the Public Defender to evaluate the impact of the methodology on the prevention of femicide.

"The effectiveness of fight against gender-based violence determines the basic values ​​ and sense of justice in the society. That is why our aim in combating violence against women and domestic violence is to change the current situation through monitoring and raising public awareness," the Public Defender said.

Welcome speeches were also delivered by Sopo Japaridze, Assistant to the Prime Minister for Human Rights and Gender Equality, Dimitri Tskitishvili, a member of the Gender Equality Council of the Parliament of Georgia and Erika Kvapilova, UN Women Representative in Georgia.

Ana Iluridze, Head of the Department of Gender Equality of the Public Defender's Office of Georgia, presented analysis and major findings of murders of women committed in Georgia in 2017. According to the report, despite the steps taken in the field of violence against women and domestic violence, there still remain a lot of challenges. Prevention of femicide, as well as the problem of identification of cases at the stages of investigation and trial, and the use of gender insensitive language by the state agencies, needs to be particularly underlined.

According to the data of the Prosecutor’s Office of Georgia, 26 murders of women occurred in 2017, 14 of which were committed by family members and 12 - in other conditions. Attempted murders of women amounted to 15, 12 out of which included signs of domestic crime, while 3 cases had other motives. In addition, in 5 cases, women were brought to suicide attempts or suicide due to domestic crime.

It should be noted that the Public Defender of Georgia has been analyzing the court judgments in the cases of femicide since 2016, in order to evaluate the real scope of the problem, the protection and prevention measures applied and the shortcomings in identification of cases.

At the end of the conference, Georgian Public Defender Nino Lomjaria and Argentinian Ombudsman Juan José Böckelsigned a memorandum of cooperation.

The conference was attended by representatives of governmental agencies, international and local organizations, as well as international missions accredited in Georgia.