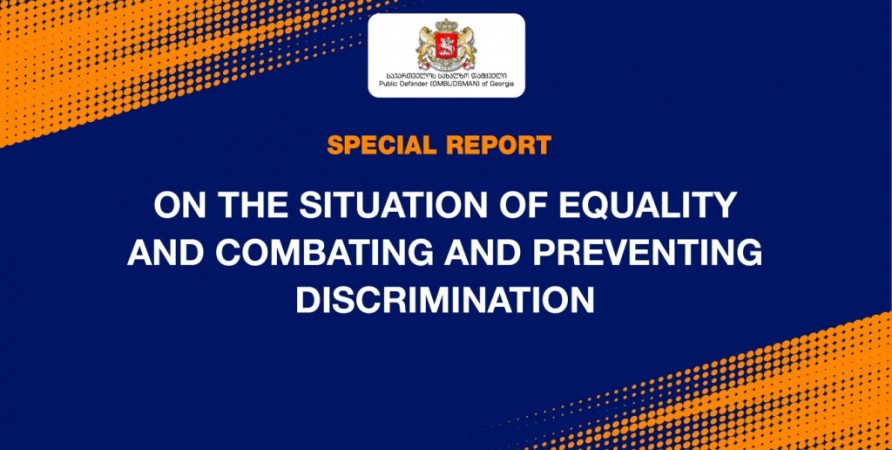 Special Report on Situation of Equality and Combating and Preventing Discrimination

On February 25, 2022, the Public Defender presented the 7th Annual Report on the Situation of Equality and Combating and Preventing Discrimination.

The report highlights obstacles faced by women, persons with disabilities, members of religious and ethnic minorities, LGBT+ community and other vulnerable groups in 2021 in terms of realization of their right to equality. The report also assesses the compliance of Covid regulations with the right to equity; shortcomings in the social protection system in terms of the protection of the right to equality and cases of violation of labour rights in civil service due to political opinions during the pre-election period. The report also offers recommendations to the relevant agencies.

The Public Defender examined 161 cases of alleged discrimination on the following grounds:

At the opening of the event, the Public Defender reviewed the state of equality and the activities carried out by the Office in 2021; She noted that there had been no improvement, while the events of July 5-6 had been particularly alarming, when law enforcement officials failed to prevent attacks by far-right groups on LGBT+ people, their rights defenders and journalists, resulting in a number of people being seriously injured. Unfortunately, despite the submission of a reasoned position by the Public Defender to the Prosecutor General of Georgia, no investigation has been launched into either public incitement to violence or organizion of violent actions.

The Public Defender also spoke about the conflicts allegedly erupted on religious and ethnic grounds, which once again proved the need for thoroughly analyzing such cases. In addition, she focused on the dismissal of people employed in local governments, public schools and kindergartens due to their political views during the pre-election period; sexual harassment and reproductive health issues; obstacles faced by persons with physical and sensory disabilities.

The Public Defender thanked international donors, especially the European Union, Council of Europe, PROLoG, UN Women and Open Society Foundation, which support the strengthening of the Office through various activities.

The report, its findings and recommendations were presented by Keti Shubashvili, Head of the Equality Department.

The meeting was moderated by Deputy Public Defender Ekaterine Skhiladze.