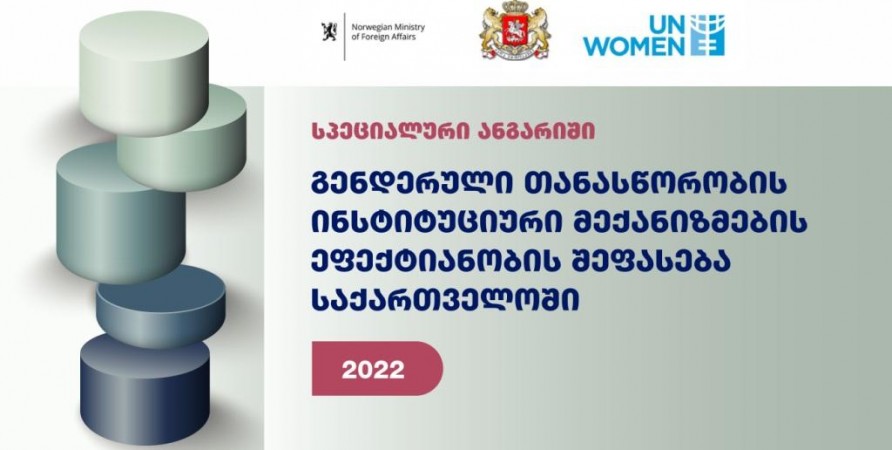 Evaluation of Effectiveness of Institutional Mechanisms for Gender Equality in Georgia

In her opening speech, Ekaterine Skhiladze, Deputy Public Defender of Georgia, stressed the importance of a well-thought-out and unified vision of the State for the creation of an effective institutional mechanism for gender equality, which in turn ensures the strengthening and sustainability of the existing mechanisms.

Kaori Ishikawa, UN Women Country Representative to Georgia, Nino Tsilosani, Member of Parliament of Georgia, and Maka Peradze, Head of the Human Rights Secretariat of the Administration of the Government of Georgia, also delivered welcoming speeches at the conference. Expert Lika Jalaghania evaluated the effectiveness of institutional mechanisms for gender equality and introduced the main findings of the study.

The study found that national mechanisms for gender equality still need institutional strengthening and refinement, which is related to the lack of systemic nature of the mechanism. The role of national mechanisms is largely reflected in their consultative functions and, consequently, their influence on policy-making and coordination is weak. Adequate human and financial resources are crucial in the implementation of gender mainstreaming; Unfortunately, this remains a problem in Georgia, which further affects the general situation of women's rights and gender equality in the country. Another challenge is the lack of readiness and coordination of institutional mechanisms for gender equality. As for the agencies, despite the significant measures taken by them, the programmes and projects implemented by them are chaotic and not based on a unified approach. Unfortunately, this trend indicates that gender equality issues are still not a priority in the country.

The online presentation was moderated by Ekaterine Skhiladze, Deputy Public Defender of Georgia. The meeting was attended by representatives of the governmental and non-governmental sectors.