From April 18 to April 22, 2016, the Human Rights Academy of the Public Defender held TOT training for 22 psychologists of the Social Service Agency of the Ministry of Labour, Health and Social Affairs of Georgia, and Small family type children houses. The theme of the training was "Developing the skills to identify psychological/psychiatric needs of the children".

The training program included both theoretical and practical elements. During the course the participants were introduced to the issues such as: the theory of attachment, attitude to child, violence and traumatic experiences, peculiarities of communication with victim children, interpretation of basic principles of the UN Convention on the Right of Child (CRC), introduction into basics of the Child’s rights, modern understanding of children’s development problems in different age groups, services for families at risk, parents involved in child care, roles of caregivers and professionals, modern understanding of services of mental health and mental health policy, role of child and adolescent psychiatry, misuse of psychiatry and other major issues.

The training was led by international expert Dainius Piuras (professor of the Department of Psychiatry at the University of Vilnius) and Georgian trainers Ekaterine Tavartkiladze (psychologist at the Public Health Foundation) and Maia Gedevanishvii, Head of the Center of Child’s Rights of the Public Defender’s Office. After completing the course, the participants were awarded certificates.

The training was held within the framework of the project “Support to the Human Rights Academy of the Public Defender” which is funded by the Norwegian Ministry of Foreign Affairs. 7 more trainings are planned this year within the project. The trainings are aimed at deepening knowledge, research and analytical skills of target groups in legal and other aspects of human rights. 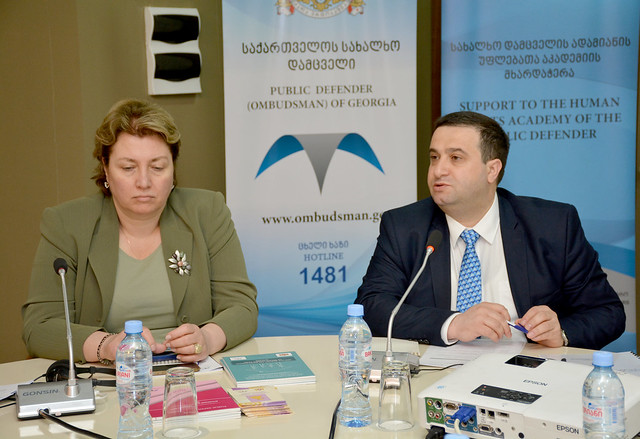