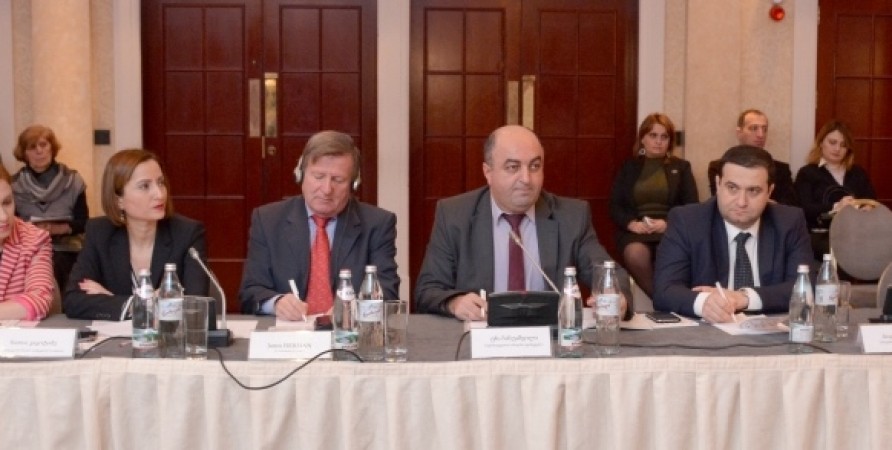 The International Human Rights Day has been observed on December 10 since 1950. By the decision of the Office of the United Nations High Commissioner for Human Rights, this year’s message is - “Our Rights. Our Freedoms. Always.” The message revolves around the timeless themes of rights and freedoms and the relevance of the work that continues in securing and ensuring them.

On December 10, 2015, the Public Defender of Georgia presented this year’s report on human rights and freedoms to representatives of the diplomatic corps, international organizations and civil society.

The report reflects the main achievements and problems in the field of human rights and notes that implementation of the basic principles of the Universal Declaration of Human Rights by Georgia would be impossible without solution of the problems given in the report.

The Public Defender termed the election of Georgia as a member of the Human Rights Council at the plenary session of the UN General Assembly as a significant event. In addition, he said it was important Georgia to perform effectively its obligations under the United Nations, to get closer to the international standards and to use the UN system for improvement of response mechanism to violations of human rights and the general situation of human rights.

Within the framework of the third wave of reforms in the justice system, an important legislative package was developed this year, which took into view one of the main recommendations of the Public Defender with regard to the introduction of electronic distribution of cases in courts. It is worth noting that, despite the institutional reform carried out in terms of independence of the judiciary, still a lot of challenges remain to be overcome in order to increase confidence in the judiciary. One of the most alarming events during the reporting period was the non-transparent and formal process of promotion of judges in the High Council of Justice.

Another significant event was the decision of the Prosecutor of the International Criminal Court to address the Judges of Pre-Trial Chamber and request authorization to initiate an investigation into the alleged war crimes and crimes against humanity in relation to the August 2008 armed conflict in Georgia.

The Public Defender welcomes the amendments made to the Code of Imprisonment in 2015, according to which, from September 1, 2016, the Public Defender/Special Preventive Group will be granted the right to take photos in penitentiary facilities.

Despite the fact that torture and ill-treatment of prisoners is no longer the main challenge, investigation into thousands of inmates’ complaints about torture, inhuman and degrading treatment is still pending, and except for few cases, no real results can bee seen with regard to these systemic violations of human rights. Use of disproportionate force by police officers during and after detention remains a problem. Unfortunately, the efforts of the Prosecutor’s Office cannot be praised in this field and the Public Defender once again emphasizes the need to establish an independent investigation mechanism in the shortest period, which will investigate the facts of torture, inhuman and degrading treatment committed by law enforcement officers, including in penitentiary facilities.

The misuse of pre-trial detention against a number of former officials created signs of selective justice. In this regard, the Constitutional Court’s progressive and important decision in the case of "Giorgi Ugulava v. the Parliament of Georgia” is worth mentioning.

During this year a diverse media environment was provided. However, at the end of the year we witnessed the court’s unjustified interference with the freedom of expression of the Rustavi 2 TV Company.

Achieving gender equality remains a problem in the country; in particular, women's political and economic activities are low; the scales of violence against women and domestic violence are alarming. The state of child's rights, including the high rate of child mortality and poverty, is still alarming and worrying. The shortcomings in the Law on the Elimination of All Forms of Discrimination create a real obstacle for the Public Defender in terms of effective implementation of his obligations. The full enjoyment of the freedom of religion is also complicated. Resettlement of refugees and their dangerous living conditions, as well as employment, safety and movement of the conflict-affected population remain to be serious challenges for the country. The restriction of the right to get education in the native language in Gali district is especially alarming.

Access to mental care shelters and institutions authorized to issue documents for getting drugs is complicated. Employment of persons with disabilities and adaptation of physical environment for them, as well as identification of violence committed against them, are problems. The social conditions of the elderly are poor; inclusive education system is problematic. Homophobic attitude towards LGBT persons, as well as timely and effective investigation of hate crimes, also remain to be problems.

Despite several recommendations, the state has not taken effective steps to create labor inspection for monitoring the protection of labor rights.

Although the Parliament of Georgia approved a legislative package on covert investigative actions, which imposed new regulations for wiretapping and personal data protection (which by all means must be evaluated as a step forward), the Law of Georgia on Electronic Communications still includes a norm, which authorizes the state authorities to copy identifiable data and get real-time information about the content of communications non-stop.

The satisfaction of the constitutional claim of Georgian citizens Ucha Nanuashvili and Mikheil Sharashidze by the Constitutional Court can be positively assessed. As a result of the decision, the Court declared the provisions of the Election Code, which provided for the rules of arrangement of 73 single-mandate constituencies, as unconstitutional.

At the event EU Ambassador to Georgia Janos Herman reviewed the steps taken in the country in terms of protection of human rights. He particularly highlighted the ongoing process of elimination of legislative shortcomings, including the liberal amendments made to the Juvenile Justice Code. When speaking about the aspects outlined in the EU Association Agreement and the visa liberalization issues, he emphasized the important role of the Public Defender’s Office, as well as professionalism and qualifications of the Office staff, in establishment of high standards of protection of human rights in the country.

After the presentation, representatives of the diplomatic corps, international and non-governmental organizations, showed interest in the details of the issues reflected in the report and got concrete answers from the Public Defender and the Deputies of Public Defender.

See the electronic version of the presentation 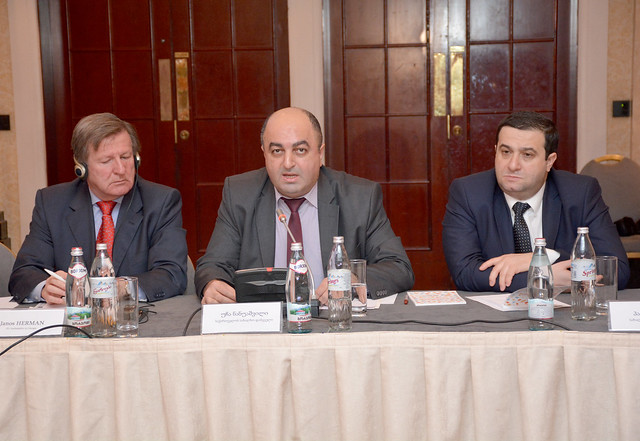