On July 2, 2015, the Public Defender of Georgia presented the report on the situation of human rights and freedoms in the county in 2014 at the Plenary Session of the Georgian Parliament.

At the presentation, the Public Defender briefly reviewed all directions and main challenges reflected in the Parliamentary Report. He spoke about positive and negative tendencies existing in the country in the light of human rights protection and importance of fulfillment of recommendations. Special emphasis was put on elaboration of the National Human Rights Strategy and the Action Plan, necessity of ratification of the number of international conventions. He also spoke about reforms and challenges in the penitentiary system; ways of addressing problems of vulnerable groups; children’s rights; issues of gender equality and establishment of tolerant environment. He emphasized about conduction of effective activities for restoration of justice, including necessity of establishment of the Independent InvestigativeMechanism.

After the plenary hearing and the Q&A the Public Defender addressed the Georgian Parliament with summarizing conclusion and alongside other issues he spoke about positive practice of cooperation on resolution draft of the Georgian Parliament. Here, he also noted that it is important to reflect house recommendations in the resolution that were introduced a new decree last year but has not been fulfilled to this day. We should mention the International Convention for the Protection of All Persons from Enforced Disappearance; also, adoption of the law on eco-migrants; change of legislation with regards to covert investigation actions and its bringing into line with European standards; similarly, like the last year, this year we asked for abolition of the penitentiary establishment N7 due to conditions there and also, adherence to confidentiality principles during meetings of prisoners with members of the National Preventive Mechanism; obligation to explain grounds and causes of transfer of convicts from one establishment to another. Again and again, establishment of the independent investigative mechanisms remains as the main demand, as well as necessity of establishment of comprehensive and effective labour inspection.

At the end of the discussion, the Public Defender reminded the Parliament of Georgia about the grave situation in the country pertaining to human rights. He noted that out of 118 651 persons with disabilities, only 24 of them are employed in the public service; over 30 000 women await granting of the single mother status to this day; over 35 000 households are considered to be eco-migrants and they live without a status. Georgia is in the top places with respect to baby death rate in the region; last year tens of women fell victim of violence and in this context it s necessary to enhance the role of women in decision-making process. According to the census, there are 263 thousand refugees and the biggest part of them live in grave social conditions; 200 000 individuals are infected by hepatitis C; last year the abortion rate reached 31 908 and many of them were minors. The Prospection works on 697 cases with regards to illegal confiscation of assets; numerous facts of ill-treatment occurred in penitentiary establishment; 522 persons were detained on the occupation line by the Russian military. The Public Defender expects from the Parliament conversations, discussion and addressing these and many more acute issues.

“I would wish to change the reality that we are discussing and I expected that we would have talked how to succeed in equal accessibility of state benefits for every citizen. How to elaborate effective and practical policy aimed at improvement of social and economic conditions of eco-migrants, homeless, persons living in mountainous regions.

I would have liked to talk how to establish real mechanisms of protection of children’s rights; how to lessen current scale of intolerance; how to make the government more accountable to direct greater efforts towards establishment of high standards of human rights; how to get closer to western standards, how to establish social responsibility in the society. I would wish for us to analyze where we are, how to create free from violence environment; to eliminate stereotypical attitudes existing in the society towards minorities, how to ensure establishment of equality and tolerance spirit; how to protect women - victims of violence. Of course, for this we need to unite all of our efforts. We, the Public Defender’s Office, will continue to work to address those challenges. We will definitely be critical, be objectivee but we will be maximally fair as it concerns human rights issues.

The Public Defender does not have the right to talk about political topics. We see these positive tendencies that are taking place in the country but we also see those problems and challenges and we call on the authorities to address them, we direct them towards specific steps to be taken to resolve them. This was undertaken by the Public Defender‘s Office during the previous government, it does this now and probably will do this in the future. He wills fulfill the same tasks even in the future, before the new government and new authorities. We will direct our efforts to make the team stronger and he will respond to all challenges. I would like to thank you all for your attention and also, thank all of our staff members who over the entire year, 24 hour a day, at the expense of their own health and by the way, in a damaged building where our safety is not protected, continued on a daily basis to work on elimination of general problems existing in the country”, - said Public Defender of Georgia at the plenary session of the Georgian Parliament. 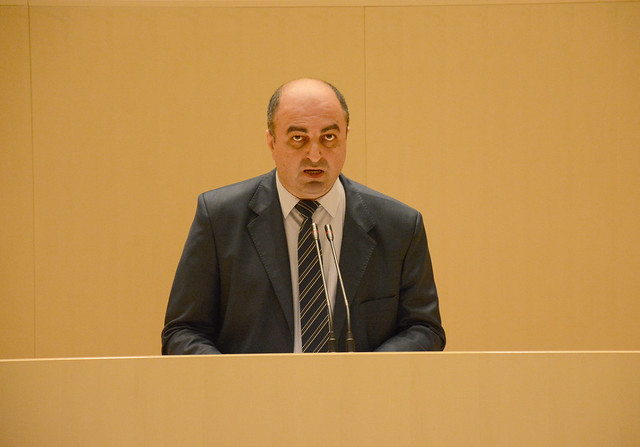