On June 26, 2015, in connection with International Day in Support of Victims of Torture, the Public Defender of Georgia held presentation of the Annual Report of the National Preventive Mechanism. At the opening of the meeting, Public Defender Ucha Nanuashvili spoke about the UN Convention Against Torture and noted that the convention obliges member states to investigate all facts of torture, prosecute and punish perpetrators, pay compensations to victims or take every necessary measure to establish the Independent Investigative Mechanism, which will ensure investigation of facts of torture, inhuman and degrading treatment committed by representatives of law enforcement agencies. In his welcome speech Deputy Head of the EU Delegation to Georgia Boris Iarochevitch spoke about contribution brought by the National Preventive Mechanism into the cause of protection of human rights. He also noted that being oriented at protection of human rights is indeed one of the most important criteria that an EU membership aspirant country should be meeting. And in this area, establishment of the Independent Investigative Mechanism is the main recommendation of the European Union in the EU-Georgia dialogue format.

The chapter on the National Preventive Mechanism of the Parliamentary Report of the Public Defender of Georgia for 2014 was presented by Head of the Department of Prevention and Monitoring Nika Kvaratskhelia. He reviewed protection safeguards against torture and other ill-treatment, order and safety in penitentiary establishments, imprisonment conditions, penitentiary healthcare, prisoners’ contacts with outside world, rehabilitation and re-socialization, situation in agencies subordinate to the Ministry of Internal Affairs of Georgia, protection of migrants from ill-treatment, situation of persons with disabilities who are deprived/restricted of liberty, legal rights of children in small group homes. Special emphasis was put on problems and challenges which, despite many positive changes, still remain in closed institutions and specific recommendations were also presented.

During the course of the presentation and at the discussion that followed there was an especially acute discussion on the issue of criminal case proceedings on charges of false report instituted by Prosecution of Georgia against one of the prisoners on the basis of information provided by the Public Defender of Georgia on the fact of torture and ill-treatment. It was noted that similar incidents create risks that in the future prisoners will refrain from applying to the Public Defender and this essentially puts in doubt the obligation that was many times assumed by the state on the road to democratic development of the country - obligation to combat torture. 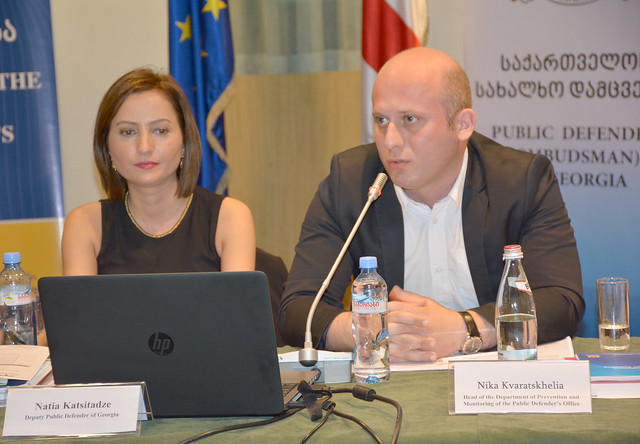