Presentation of the Public Defender Parliamentary Report for 2014

On June 4, 2015, Public Defender of Georgia Ucha Nanuashvili presented the Public Defender Parliamentary Report on the situation in human rights and freedoms in Georgia for 2014 and a short version of this 900-page document to representatives of diplomatic corps, non-governmental and international organizations.

When making his welcome speech at the presentation, Deputy Head of the European Union Delegation to Georgia Boris Iarochevitch noted that issues reflected in the report were very important and valued for the EU, therefore they supported the Public Defender’s Office and this support would continue.

At the event, the Public Defender reviewed wide range of civil and political, economic, social and cultural rights and main, significant recommendations developed for various branches of authorities; emphasis was put on positive and negative tendencies identified in human rights area. It was noted that in recent years, number of applications addressed to the PD has increased significantly which indicates to rise in public awareness of the Public Defender institution.

The report contains 33 chapters and it was the first time that 7 directions appeared in the scope of study of the Public Defender. These directions are: protection of migrants from ill-treatment, non-compliance with lawful requests of the Public Defender of Georgia, prohibition of discrimination, right of election, right to protect cultural heritage, right to life and aliving environmentfree fromhazards and legal rights of foreigners.

Following the presentation, the Public Defender of Georgia answered questions of representatives of international and non-governmental organizations. The discussion touched such issues as necessity of implementation of laws oriented towards protection of human rights; accessibility of healthcare; situation existing with regards to children’s rights and monitoring of education institutions; facts of ill-treatment in penitentiary institutions; scarcity of rehabilitation programmes for drug-addicts; problems of the homeless, etc.

When speaking about the process of realization of the recommendations, the Public Defender noted that there are series of issues with regards to which government agencies limit their efforts to just taking temporary measures instead of fulfilling them which is unsatisfactory for the Public Defender.

Participation of the Public Defender in the process of development of the law on eco-migrants attracted special interest. It was noted that the Office was actively involved in the working committee though due to lack of finances discussions about the law was suspended. In the opinion of the Public Defender, stopping activities necessary for protection of human rights are unacceptable and he believes that the state is obligated to constantly make certain steps in the scope of its abilities to rectify the situation.

Adviser to the Prime Minister in Human Rights and Gender Equality issues Sopho Japharidze stated that the Office of the Prime Minister to closely communicate with the Public Defender in the process of development of the action plan for human rights for 2016-2017.

Deputy Head of the Office of the Council of Europe to Georgia Alessandro Savaris spoke about continuing cooperation and fruitful work of the Public Defender’s Office.

The event was held with financial support of the EU Project “Support to the Public Defender’s Office”. The discussion was moderated by head of the project team Tamar Khidasheli.

Presentation of the Public Defender Parliamentary Report for 2014 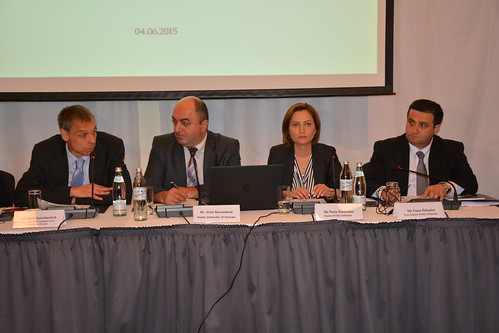