On May 21 and 22, 2015, at the Parliamentary Committee of Human Rights and Civil Integration, representatives of state bodies presented reports on the process of fulfillment of recommendations presented in the Public Defender report on the situation in human rights and freedoms for 2014.

At the opening part of the meeting, Public Defender Ucha Nanuashvili spoke about definite tendencies and priorities regarding protection of human rights in 2014. He briefly reviewed thematic of the extensive parliamentary report, as well as main recommendations issued towards various branches of the authorities. He also noted that several recommendations had been repeated for years already since despite acuteness of these recommendations addressees have not yet considered them.

Compared to the previous years, the indicator of fulfillment of the Public Defender’s recommendations and proposals have increased but numerous problematic issues still exist there and their resolution needs active cooperation and intensive work of the Public Defender and all government branches. 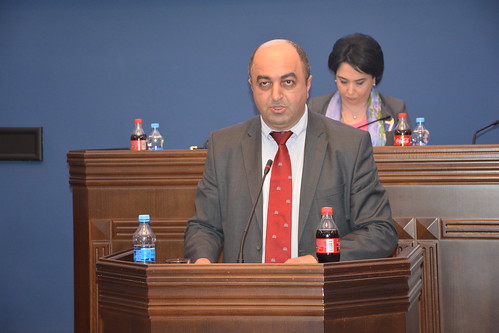