Public Debate : A country is ready or not to solve problems of eco - migrants

The Public Defender of Georgia, in cooperation with Tbilisi State University and by the support of the European Union project, held another public debate on the country’s capabilities to solve the problems of eco-migrants. The event was moderated by representative of the Public Defender’s Office Tatuli Todua. The topic of the debates was selected as a result of surveying the relief efforts of the 13-14 June disaster.

In his opening remarks the Public Defender talked about the state of eco-migrants in the country and expressed his hope that the debate would help revelation of problems and means for their solution.

In her report Deputy Public Defender Natia Katsitadze said that eco-migrants affected and displaced by disasters had severe problems.

The Public Defender has been raising the above-mentioned issue before state agencies for years, though the state still does not have any strategy in this regard. No plan has been outlined for their resettlement, employment or integration. Moreover, the law does not provide for exact definition of eco-migrant. Their quantity is unclear and in many cases statuses are not ascertained. Significant part of eco-migrants lives in grave social-economic conditions and is left without permanent residential space.

Deputy Mayor Nana Khatiskatsi highlighted that the City Hall has already developed mechanism for defining the needs of the 13 June disaster victims and that the local government will gradually provide them with apartments and compensations by the support of international and public assistance. In addition, the City Hall will organize psychological assistance to the victims in temporary accommodation places.

Deputy Minister of Internally Displaced Persons from the Occupied Territories, Accommodation and Refugees Gogi Patsatsia stated that the law on eco-migrants has already been drafted and forwarded to the Government. The Deputy Minister also talked about the roles and functions of self-governments in the process of assistance of disaster victims.

Tsiala Qatamadze, the Executive Director of NGO “Borjghali”, talked about the necessity of strengthening state policy.

At the discussion, held after reports were delivered, representatives of NGOs and society talked about the weakness of state policy concerning eco-migrants, disaster threats in Georgia, and readiness of state agencies, especially of self-governments, for prevention of the threats. Due attention was paid to the problems of eco-migrants settled in Tsalka. 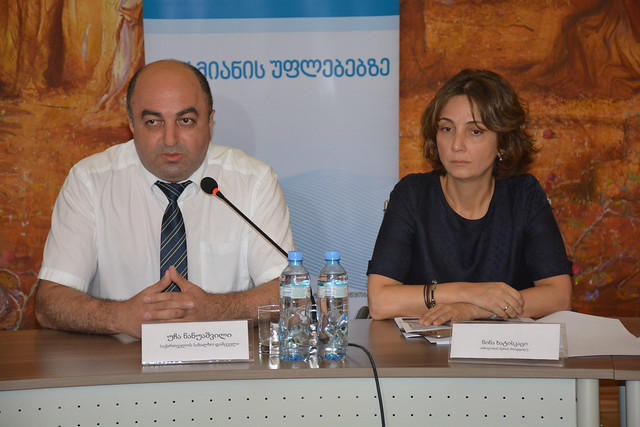