On April 15, 2016, the Public Defender held another public debate and discussed the implementation of recommendations offered in the report of Maina Kiai, United Nations Special Rapporteur on the rights to freedom of peaceful assembly and of association, issued on June 8, 2012.

The public debate was opened by Public Defender Ucha Nanuashvili with a welcome speech. The event was moderated by Giorgi Gogia, representative of the Human Rights Watch in Georgia.

On June 8, 2012, United Nations Special Rapporteur Maina Kiai published a special report on Georgia regarding the realization of the right to freedom of peaceful assembly and of association in Georgia, where recommendations to the Georgian Government were presented in two categories. One category is about the freedom of association, while the other is about the right of peaceful assembly. The rest of the recommendations address international organizations, Georgia’s civil sector and the Public Defender.

The Public Defender of Georgia reviewed the recommendations on the rights of freedom of association and peaceful assembly and presented a report on their implementation at the debate.

The situation of the implementation of the recommendations was presented by Deputy Public Defender Natia Katsitadze. She noted that the Government took into account part of the recommendations on the freedom of association; in particular, amendments were made to the laws on Political Unions of Citizens and State Audit Office, which were the basis for criticism of the Special Rapporteur; in the recent years improvement could be observed in the election environment – the use of financial resources was of less systemic nature and was limited to specific facts.

Gender inequality is still unresolved; quota system should be improved.

Some changes were made to the Labour code; signing of the Additional Protocol to the Council of Europe Social Charter is necessary.

The situation regarding the right of peaceful assembly is quite worrisome. Despite the insistent recommendations of international organizations, no changes have been made to the Law on Assemblies and Manifestations.

UN Special Rapporteur Maina Kiai noted that from the human rights point of view, it would be an important step forward if the Government canceled the use of administrative detention in relation to the realization of the right of freedom of association and of assembly. Great part of Maina Kiai’s speech was devoted to the importance of election environment for the development of a democratic state. He also talked about the devastating impact of corruption on human rights in the context of “Panama Papers”. He noted that business interests should in no way stand above human rights and public interests and that it is important to strengthen non-governmental sector.

Norwegian Helsinki Committee adviser Aage Borchgrevink held a presentation, where he reviewed the Strasbourg court decisions in the field of protection of the rights of political associations, in accordance with the requirements of Article 11 of the Convention on Human Rights.

Maia Kvirikashvili, Head of the Human Rights Department of the Chief Prosecutor’s Office, focused on the investigations of violations of freedom of assembly and release of video footage showing private life, including the events of May 17, 2013, and court decisions.

Representatives of non- governmental organizations raised the issues of legislative shortcomings existing in the field of protection of human rights and reviewed ways for their solution.

Report of Maina Kiai, United Nations Special Rapporteur on the rights to freedom of peaceful assembly and of association, on the implementation of the report of June 8, 2012 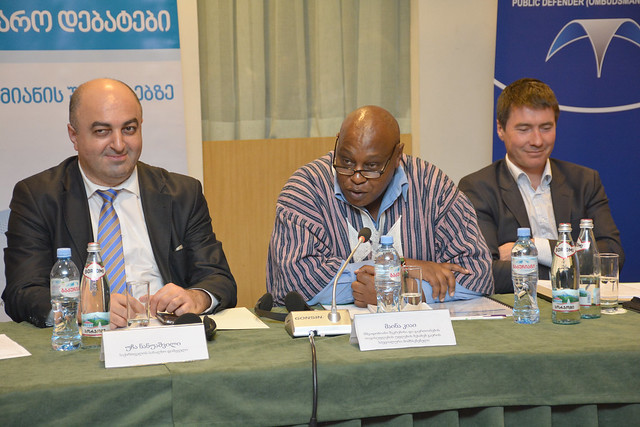