Public Debate on the topic of the Public Defender Annual Report

On May 30, 2015, the Public Defender of Georgia held a debate on the topic - “Situation in human rights and freedoms in Georgia: achievements and challenges”. The event was moderated by head of the EU project “Public Support to the Public Defender’s Office” Tamar Khidasheli.

Public Defender of Georgia Ucha Nanuashvili stressed importance of greater space in the society for discussion of issues concerning human rights and special importance of participation of the President of Georgia in this discussion. Also, he briefly reviewed the situation with regards to human rights and freedoms in Georgia in 2014; summarized main tendencies and directions presented in the Parliamentary Report; specially emphasized especially acute issues. The Public Defender gave a positive assessment to legislative changes that were introduced last year aimed at improvement of protection of human rights.

During his speech, President of Georgia Giorgi Margvelashvili spoke about standards of protection of human rights. He also discussed Public Defender’s duties and noted that he believed it to be appropriate for authorities of the Public Defender and mechanisms of conduction of activities to be increased. The President especially emphasized necessity of raising the level of tolerance culture in the country and noted that promoting hate towards the different can put the state of multi-ethnic and multi-confessional Georgia in danger.

Representatives of the Human Rights Watch Organization in South Caucasus Giorgi Gogia stated that international organizations agree to the position of the Public Defender with regards to acuteness of issues that emerged in the Annual Report and necessity of their resolution. He also presented main directions of the Human Rights Watch and spoke about excessively severe drug policy of the Georgian Authorities.

The event was attended by representatives of diplomatic corps accredited in Georgia, international organizations, government and non-governmental organizations, also, students, journalists and persons interested in the subject.

During the debate, Public Defender Ucha Nanuashvili and Representative of the Human Rights Watch Giorgi Gogia answered questions of diverse nature. The Public Defender noted that establishment of labour inspection that was recommended by him numerous times will be the most effective mechanism for protection of labour rights; special interest was attracted by issue of Child’s protection that needs more attention from the authorities. The Decree on Child Protection Referral Procedures adopted by three ministries (Ministry of Internal Affairs, Ministry of Education and Science and Ministry of Labour, Heath and Social Affairs) needs to become more effective. The Public Defender noted that he would not weaken his efforts aimed at protection of children’s rights.

With regards to the situation of human rights in conflict regions, the Public Defender stated that it had been one year since a special adviser was working on these issues in the office; several reports, studies and recommendations towards authority bodies that aim at resolving of the issue to a possible degree, have been prepared. Though, there have not been made any significant changes so far. According to Giorgi Gogia, for several years, the situation remains unchanged in Gali and Akhalgori and main problems remain unresolved.

They also spoke about low level of tolerance culture and ineffectiveness of investigations of hate crimes; special attention was paid to necessity of creation of the independent investigative mechanism aimed at investigation of offences allegedly committed by law enforcers, also noted that establishment of this mechanism will promote establishment of fairness in the country and will increase trust towards judicial authorities and law-enforcement bodies. 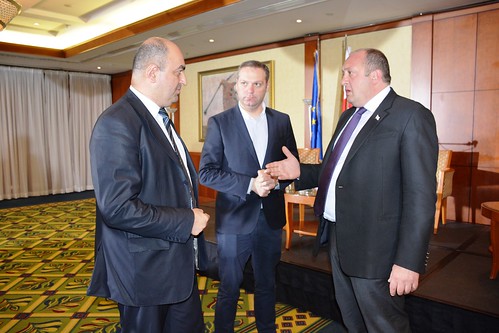