Report of Ministry of Labour, Health and Social Affairs on Implementation of Public Defender’s Recommendations

On February 12, Deputy Minister of Labour, Health and Social AffairsZaza Sopromadze presented a report on the implementation of Public Defender’s recommendations by the Ministry.

One of the recommendations of the Public Defender concerned strengthening of information campaign on state programs and services as well as on how to use them.

The Deputy Minister discussed in detail the information campaigns on legislative regulations for imposition of ban/restrictions on the use of tobacco, brochures and flyers on physical activities, healthy nutrition and consumption of excessive alcohol, posters on the rights defined by the Convention on Child’s Rights. He also talked about the information campaign on elimination of Hepatitis C, held within the framework of the state program.

The Ministry of Labour, Health and Social Affairs held various trainings on giving up smoking, preparation of hotline employees, dangers of human trafficking, domestic violence, violence against women and other issues.

Another recommendation of the Public Defender concerned development of special external supervision system for psychiatric services and evaluation of the efficiency of the Quality Control Service of the Academician B.Naneishvili National Mental Health Center.

According to the Deputy Minister, the State Concept for Mental Health Protection, approved by the Parliament and the Government, as well as the strategic development document and the action plan for 2015-2020 are aimed at preventing mental disorders, protecting the rights of people with mental disorders and their integration with the society, as well as at reducing the rate of diseases and mortality caused by mental disorders.

With regard to the Ltd. Academician B. Naneishvili National Mental Health Center, the Deputy Minister noted that the privatization conditions covered all necessary components, including construction, equipment, improvement of buildings in compliance with the legislation, the number of beds, relevant infrastructure, public and patients’ safety, etc.

The Ministry is now implementing the recommendation on provision of information on health and medical insurance programs to national and ethnic minorities in their own languages.

The Ministry regularly prepares information materials on state health care programs in the languages of the national minorities. In addition, together with the Ministry of Education and Science, the Ministry of Labour, Health and Social Affairs works on provision of Georgian language courses for the medical staff oinf the areas inhabited by ethnic minorities.

A special work group was set up by the Minister's order. The group, in accordance with the Public Defender’s recommendation, will consider changes in the rules of reimbursement during pregnancy, childbirth, child care or child adoption, in order to eliminate gender discrimination.

The recommendation on preparation of specialized social workers and those working in the field of domestic violence, provision of necessary conditions and relevant powers to them, is now being implemented.

The Deputy Minister spoke in detail about the services rendered in the children’s large and small group homes, provision of additional resources to them, problems in the process of deinstitutionalization and implementation of the Public Defender’s recommendations in this area.

It was noted that one of the main directions of child welfare reform is development of families and network of necessary services, which strengthens the social functioning of families. Various sub-programs of social rehabilitation and child care state programs serve to implement these objectives. Among them are: planning of short-term individual activities, development of evaluation indicators, personnel training, children's individual development plans, adequate risk assessment, definition of alternative form of child care, etc.

The Deputy Minister presented a whole chain of development of individual training programs in case of identification of a beneficiary with special educational needs. He also noted that the Public Defender’s recommendations concerning the needs of children under state care and protection from violence were taken into account, a number of mechanisms were developed, intensive monitoring was carried out, trainings of social workers and care providers were held.

According to the Public Defender’s recommendation, it is planned to optimize two large-size institutional facilities and to open small group homes for children with disabilities in a geographical area suitable for the children’s needs.

At the session the Public Defender once again emphasized the necessity for creation of labour inspection, talked about the lack of labour safety mechanism and noted that the problem is systemic and it can be solved only through complex leverages. 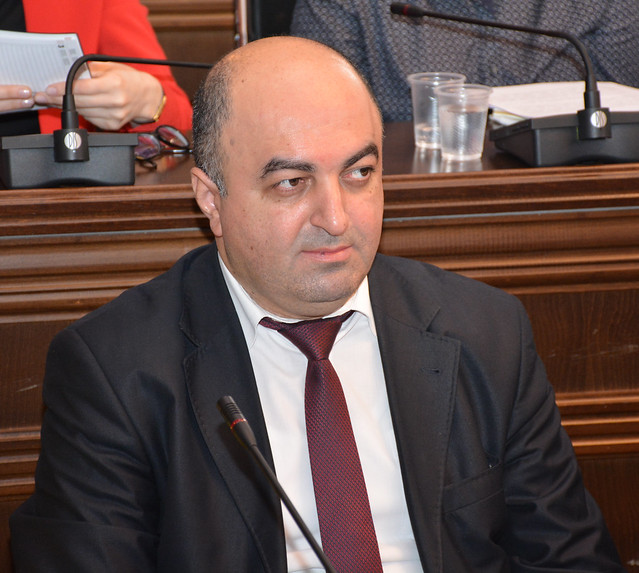