On June 5, 2015, the Public Defender presented reports “On legal rights of conflict-affected population” and “On internally displaced persons” to the representatives of government agencies, non-governmental and international organizations.

The Minister of Internally Displaced Persons From the Occupied Territories, Accommodation and Refugees of Georgia Sozar Subari spoke about specifics of accommodation of IDPs and new initiatives of the Ministry. Also, he discussed positive outcomes achieved in cooperation with the Public Defender’s Office.

The Deputy Representative of the UN High Commissioner for Refugees’ in Georgia Hay Shelow spoke about successful and effective cooperation with the Public Defender’s Office and expressed a wish to continue these relations.

Issues of living conditions of IDPs, issues of their accommodation and privatization are emphasized in the report; it also reviews problems of low level of awareness among IDPs regarding the initiatives aimed at improving their rights.

Senior Adviser to the Public Defender of Georgia on Human Rights Issues in Conflict-affected Regions Medea Turashvili reviewed the rights of population living in the villages along the dividing line and occupied territories. She spoke about grave socio-economic situation of families living inthese areas, restrictions of freedom of movement and frequent detentions.

In December, 2014, 6 citizens of Georgia were deprived of liberty under various charges in Tskhinvali prison. There are 7 South Ossetian prisoners on the Georgian controlled territory, in Rustavi and Ksani prisons, who demand “exchange” or transfer to Tskhinvali. As to persons deprived of liberty in Abkhazia, at this stage, the Georgian authorities do not have their full list or information on changes issued against them.

The year of 2014 was especially difficult for residents of Gali district. Violation of rights to life, movement, receiving education in native language, right to property, illegal deprivation of liberty – this is an incomplete list of violations that are regularly occurring there.

The presentations were followed by the discussion during which civil society and government representatives discussed the current legislative base in the country and rights of IDPs and the necessity of more mechanisms to protect conflict-affected population.

The event was funded by the project "Support to the Office of the Public Defender to enhance its capacity to address the situation of IDPs and other conflict-affected individuals” of UNHCR. 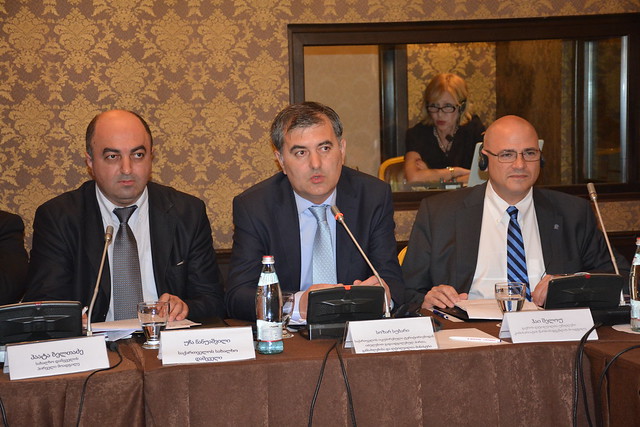