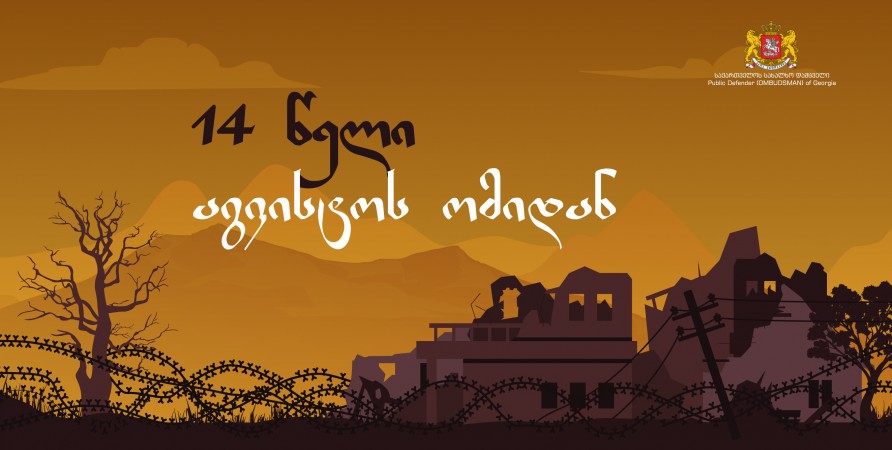 14 years have passed since the war of August 2008, but its consequences are still being acutely experienced by the population remaining in the occupied territory or living near the dividing line. The situation of internally displaced persons is also grave, who are still not given the opportunity to return to their homes. As a result of the conflicts of the 1990s and 2008, 289,925 internally displaced persons are registered in Georgia.

The illegal practice of arresting people for the so-called illegal border crossing is getting heavier. In contrast to the previous years, when the occupation regime used to only establish administrative offences and impose fines, the cases of long-term illegal imprisonment have become more frequent in the recent period. A clear example of this was the illegal detention of Georgian citizen Kristine Takalandze on July 26, 2022. According to the information released, Takalandze is charged with "espionage for the Georgian special services". The arrests of Vazha Gaprindashvili, Genadi Bestaev, Irakli Bebua, Khvicha Mghebrishvili, Zaza Gakheladze, Vladimer Kaniashvili, Kakhaber Natadze, Mamuka Chkhikvadze, Zaza Megrelishvili, Tamaz Gogichashvili, Lasha Khetereli and others are also worth noting.

In addition to the illegal arrests of citizens, the cases of beating, ill-treatment and torture of prisoners are also frequent in temporary detention centers and prisons - for example, the cases of Genadi Bestaev, Anri Ateiba and Khvicha Mghebrishvili.

The situation is also difficult in terms of access to education in the mother tongue. According to the decision of the de facto ministry of education of occupied Gali, education in the Georgian language has been completely banned, including in the 11th grade, and the native language has become a subject of the foreign language and literature. As for the occupied Akhalgori, in the 2021-2022 academic year, one Georgian school was closed due to the absence of schoolchildren. In 5 out of 6 functioning Georgian schools, the Georgian language is taught only in grades 9-11. Due to the barriers imposed by the occupation regime, the number of students in both occupied regions is decreasing year by year. The Public Defender has been talking in detail about the challenges relating to the realization of the right to education in her annual reports for years.

Similar illegal actions carried out by the occupation regime grossly violate the rights and freedoms of the population living in the occupied territories. The Public Defender of Georgia calls on the authorities of Georgia, with the help and involvement of the international community, to strengthen pressure for the protection of the rights of people living in the occupied regions, including for the timely release of Georgian citizen Kristine Takalandze.

According to international standards, along with the de facto authorities, the Russian Federation, as a state exercising effective control, is also responsible for the human rights violations committed on the territories out of Georgia’s control. By its judgement of January 21, 2021 in the case Georgia v. Russia II, the European Court of Human Rights also confirmed the continuous exercise of effective control over the Tskhinvali region and Abkhazia by Russia and, accordingly, Russia's responsibility for human rights violations committed in the above territories.