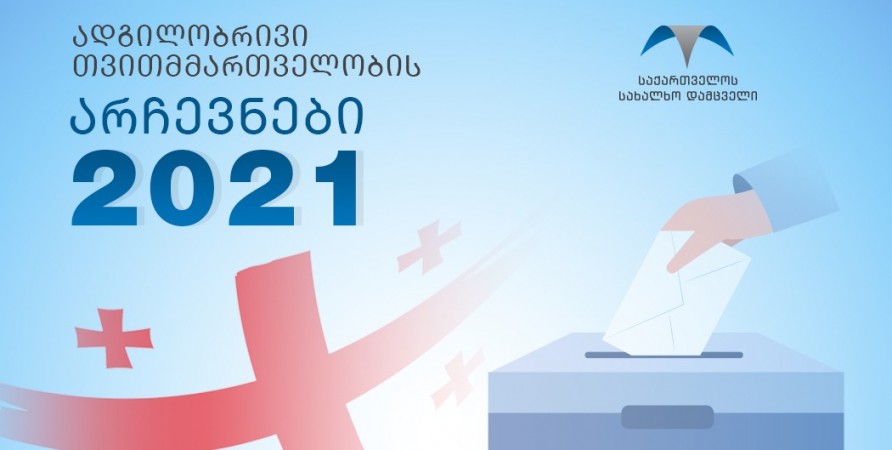 According to the decree issued by the President of Georgia on August 2, 2021, the local self-government elections will be held on October 2 and thus the pre-election campaign has already started in Georgia.

Given the highly polarized and violent pre-election periods of parliamentary, presidential and local elections in recent years, the Public Defender of Georgia calls on the relevant institutions to prevent potential human rights violations.

The Public Defender of Georgia, within the scope of her authority, has been observing the exercise of the right to vote for many years.

The practice of the past years shows that discrimination on political grounds against employees of local self-government bodies, directors of educational institutions, kindergartens and schools and other persons employed in the public sector increases especially in the pre-election period.[1] The above leads to the violation of fundamental human rights and negatively affects public confidence in the electoral process. Equal treatment and non-discrimination are general minimum standards that must be respected by all, in all circumstances, including during election campaigns. Accordingly, the Public Defender of Georgia calls on the Government to fulfill both the negative and positive obligations imposed on it in this direction and not to implement or allow discrimination on political grounds during the pre-election period or on the election day.

Unfortunately, election entities usually incite discrimination on various grounds and use hate speech during the election period, including on xenophobic, religious and homophobic grounds. Political debates are characterized by insulting statements made by participants against each other. The sexist attitude towards women involved in political life is especially evident, which is often used as a tool of political struggle against them.[2]

The Public Defender emphasizes that such facts hinder the formation of a peaceful election environment. It is necessary for representatives of political parties, relevant candidates, supporters of political teams/candidates and political officials to show high political and civic responsibility and to promote a pluralistic, non-violent, hate speech-free election campaign. In order to cultivate a political culture focused on democratic values, it is important that candidates' election campaign be focused on meaningful and programme-oriented discussions.

In addition to the above, the Public Defender urges political entities and their activists to refrain from using discriminatory policies in their programmes and campaigns and from voicing or supporting ideas recognizing the superiority of certain groups of people based on ethnicity, religion, gender, sexual orientation, or other grounds. In addition, they should not marginalize non-dominant groups for the purpose of gaining support, should demonstrate responsibility and fairness when speaking on sensitive topics in order to avoid stigmatization of minorities.

The highly polarized electoral environment of recent years has been further aggravated by physical confrontation and violence, as well as alleged incidents of voter control and bribery. As repeatedly assessed by the Public Defender, such a situation hinders the conduct of elections in a peaceful and healthy environment, and ultimately significantly undermines the democratic development of the country. Thus, the Public Defender calls on all election entities and their supporters to show a high political culture and to refrain from the violent and confrontational pre-election environment, which has become a vicious practice. Moreover, high-ranking officials, leaders of the ruling team and opposition parties should publicly condemn similar facts and call on their representatives and supporters to facilitate the conduct of the election process in a peaceful manner. In addition, when detecting such cases, law enforcement agencies should immediately take effective steps to identify responsible persons and take all legal measures against them.

The Public Defender also calls on the media to provide appropriate explanations relating to the use of hate speech while covering election campaigns and to respond critically to similar facts. It should also be emphasized that the media has an important role to play in facilitating informed choice of people, which is threatened by the current highly polarized environment. Accordingly, the Public Defender calls on all media outlets to cover the pre-election campaign in a balanced and in-depth manner, including through relevant investigative and analytical programmes.

At the same time, the Public Defender emphasizes the special role of the media in controlling the conduct of elections in accordance with the pre-election campaign law, in a free and fair manner. Thus, in view of the recent increase in criminal acts against representatives of the media, the Public Defender calls on the relevant agencies and officials to ensure safe environment for journalistic activities, and in case of assault, obstruction or other offences against them, to conduct a timely and effective investigation. In addition, in order to avoid promotion of incidents, it is important for political officials to refrain from making statements aimed at discrediting journalists.

Within the framework of her mandate, the Public Defender will monitor the 2021 self-government elections, both through detecting human rights violations on the election day and monitoring the pre-election environment.

[2] See the Public Defender’s Special Report on Combating and Preventing Discrimination and Situation of Equality, 2020, p. 46.