On February 16, at the Human Rights and Civil Integration Committee session, Ketevan Tsikhelashvili, First Deputy of the State Minister of Georgia for Reconciliation and Civic Equality, presented the report about the fulfillment of Public Defender’s recommendations.

In relation to the recommendation, which envisaged – the State Minister for Reconciliation and Civic Equality of Georgia should continue work on developing new policy for reinstatement and restitution of property rights of individuals affected by conflicts during 1990’s in Georgia, Following an additional question by the Public Defender, Deputy State Minister stated that negotiations under the Geneva Format on the return of IDPs are still politicized. The commission under the Ministry of Internally Displaced Persons from the Occupied Territories, Accommodation and Refugees of Georgia is not successful at this stage, since, according to applicable law, the issues should be discussed at tripartite meetings, while Ossetian party, which has failed to name candidates for the membership of the group, is not involved in tripartite meetings.

Ketevan Tsikhelashvili spoke about active participation of the Office of the State Minister of Georgia for Reconciliation and Civic Integration in Geneva international discussions and in the meetings of the Incidents Prevention and Response Mechanism (IPRM); last year 4 meetings were held in Geneva and 1 meeting was held in Ergneti. As part of both formats, the Georgian party always brings up the issues of: human rights violations on the occupied territories of Georgia, issues with free movement of people across the administrative boundary lines, education, social protection and other issues. On February 5, 2016, works aimed at seeking persons missing in the direction of Tskhinvali were resumed.

It should be mentioned that on January 20, 2016, at the last meeting of the IPRM mechanism a decision was made about the resumption of tripartite coordination mechanism under the aegis of the Red Cross.

At the session, Ketevan Tsikhelashvili provided a broad overview of activities carried out by the Office of the State Minister over past years. She spoke about the improvement of the general education system, performed activities and increased access to education.

In relation to access to media and information– Ketevan Tsikhelashvili stated that ethnic minorities are able to get news about ongoing political and economic processes in the country on a daily basis. Through Channel 2 of the Public Broadcaster “Natsionaluri Moambe” (National Bulletin) is aired in Abkhazian, Ossetian, Armenian, Azerbaijani and Russian languages; while on Radio 1 air news programs are also aired in Kurdish language. A joint project of Radio Tavisufleba (Liberty) and Voice of America – news analytical program Real Time, as well as documentary series Multiethnic Georgia are aired by Public Broadcaster.

Although, the Public Defender did not agree with the assessments of the State Minister’s Office and said that in this direction the recommendations of the Public Defender have not been fulfilled for years. Due to scarce funding, the number of copies of Gurjistan and Vrastni -- newspapers published in the national minority languages -- is small; The programs Our Yard and Our Georgia that covered topical issues for national minorities and that were directed at their integration have been suspended and there are no prospects that the Public Broadcaster will resume airing these programs. It can be said that the work of the Public Broadcaster is not sufficiently adapted to the interests of the citizens of Georgia who do not have a high command of the state language and respectively, national minorities are primarily getting the news from the news media of neighboring countries.

According to Ketevan Tsikhelashvili, under the supervision of the Office of the State Minister of Georgia for Reconciliation and Civic Equality, a working group has been established by the Central Election Commission on ethnic minorities issues, and it envisages the translation of all necessary materials into ethnic minority languages, awareness raising campaign for young voters and women around electoral process; holding meetings, workshops, trainings in ethnic minority regions. She mentioned that in general, the low participation of ethnic minorities in politics and the civil service remains a challenge.

For ethnic minorities, awareness raising campaign was implemented about healthcare and social protection state programs, including state program on the elimination of Hepatitis C. Furthermore, awareness raising campaign is underway about the EU-Georgia Association Agreement; various activities have been held for the retention of identity of ethnic minorities, protection and development of their cultural heritage.

First Deputy of the State Minister reviewed the activity of Temporary Governmental Commission on Responding to the Needs of Affected population living along the administrative boundary line. Among them, the rehabilitation and construction of water boreholes, cleaning of the Tiriponi channel, supply of fuel materials, upgrading school libraries, equipping schools with computers and internet network.

Furthermore, at the decision of the Commission, out-patient medical facilities were organized at 23 villages to provide quality medical services to the population; physicians and nurses were added to the regions; residents of South Ossetia and Abkhazia are able to receive free of charge qualified medical assistance at any medical institution on the territory controlled by the Government of Georgia.

In addition to other issues, works aimed at establishing the owners of immovable property in the villages along the administrative boundary line and registration of property are underway. 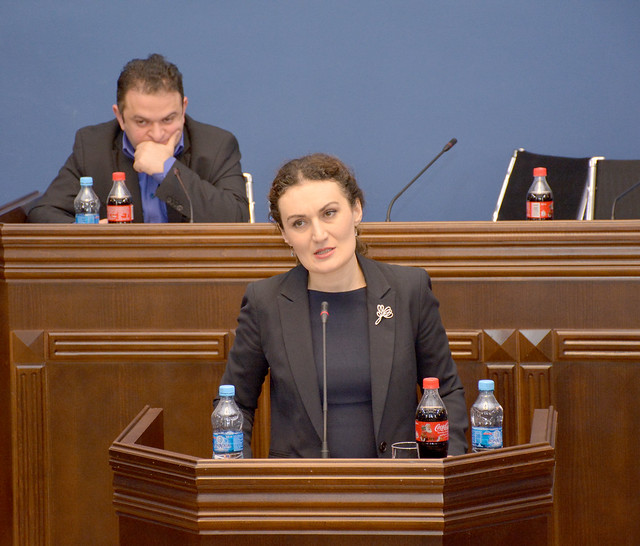