On April 14 and 15, 2016, the Public Defender's Office was visited by members of the International Advisory Board: Norwegian Helsinki Committee Advisor Aage Borchgrevink, Conflict and Cooperation Expert Jorgen Johansen, Council of Europe Program "HELP in 28" Coordinator Eva Pastrana and UN Special Rapporteur on the rights to freedom of peaceful assembly and of association Maina Kiai.

Maina Kiai particularly highlighted the role of the Public Defender in the investigation of alleged crimes committed during the 2008 war launched by the International Criminal Court and advised Public Defender Ucha Nanuashvili to familiarize with the experience of the countries where the International Criminal Court had conducted public inquiry in the past, in order to create correct expectations in the public.

According to Maina Kiai, it is also important the Public Defender's Office to begin to actively study alleged cases of corruption, as human rights violations, especially in light of the case of the so-called "Panama Papers". He also stressed the importance of participation of the Special Rapporteur in the process of preparation of amicus curiae briefs by the Public Defender.

Eva Pastrana stressed the importance of the implementation of the anti-discrimination law and the Public Defender's efforts in this regard.

Jorgen Johanssen said it was necessary to create a parliamentary commission for investigating the recordings showing private life and for identifying perpetrators. "It is necessary to find out what is going on behind the closed doors of special services. It is important to share the experience of other countries in terms of parliamentary and public control over the activities of special services,"- said the adviser.

Aage Borchgrevink expressed concern that despite the fact that the Public Defender devoted a special report to the Lopota operation and has repeatedly appealed to the authorities in his annual reports on the issue, the investigation has not moved forward. The advisor demanded resolution of the issue and more attention from the Government.

The advisers also developed a letter to the Parliament and the Government, in which, among other important things, one of the main recommendations is provision of the Public Defender's Office with a proper building.

On April 15, after the meetings and consultations, Public Defender Ucha Nanuashvili and Public Defender's International Advisory Board members held a press conference.

Creation of the Advisory Board was part of Public Defender's Strategy and Action Plan for 2013. The goal of the Board is to help the Public Defender in defining and implementing the human rights priorities and perspectives. 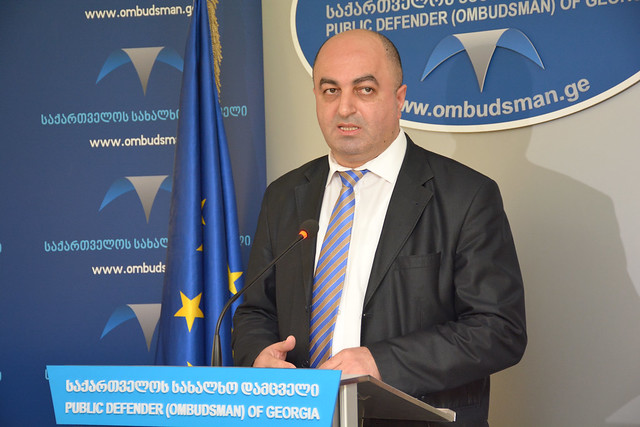