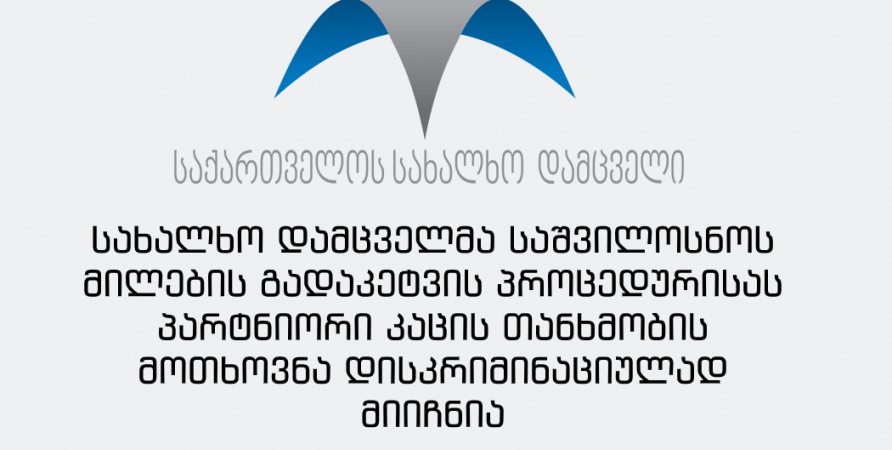 On April 13, 2020, the Public Defender of Georgia addressed JSC Chachava Clinic and the Minister of IDPs from the Occupied Territories, Labour, Health and Social Affairs of Georgia with a recommendation relating to the establishment of direct discrimination on the ground of sex.

The basis for the recommendation was the patient’s application, in which the applicant indicated that she had been required to submit her husband’s written consent for the tubal occlusion procedure.

After examining the relevant circumstances, including the opinion of the clinic, it was found out that the purpose of the above practice was to prevent the complaints of the patient's spouse/partner towards the clinic in the future and to prevent conflict in the family. However, according to the Public Defender, the issue is related to the woman’s right to control her own sexuality, including sexual and reproductive health, without discriminatory treatment. At the same time, the legal acts regulating the provision of medical services do not provide for the requirement of a written consent of a relative/family member, unless the patient is not capable of making a decision.

Consequently, the Public Defender considers that in the absence of legal grounds, the practice of the clinic in this direction may not have any legitimate aim. The practice established at the Chachava Clinic is discriminatory and allows the spouse/partner to control woman's reproductive health and her body without any legal grounds.

Based on the above, the Public Defender addressed JSC Chachava Clinic with a recommendation to eliminate the practice of requesting written consent of the spouse/partner in an application for female sterilization; to ensure that only the patient's signed consent is recorded in the application for female sterilization in the future, with the exceptions provided for by legislation; and to be guided by the anti-discrimination and health care laws of Georgia when performing sterilization procedures.

It should be noted that the Public Defender identified similar practice in 2018 as well.[1] Accordingly, the Public Defender once again recommended the Minister of IDPs from the Occupied Territories, Labour, Health and Social Affairs of Georgia to continue providing information to perinatal service providers about the inadmissiblility of requesting the mandatory written consent of the spouse/partner during tubal occlusion (sterilization).