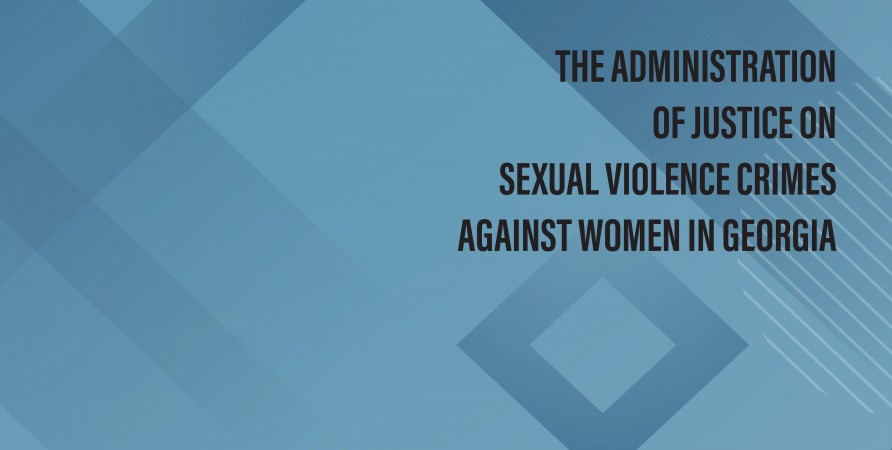 Administration of Justice on Sexual Violence Crimes against Women in Georgia

The study analyses the legislative and judicial barriers relating to cases of sexual violence after the ratification of the Istanbul Convention in 2017 and offers recommendations for improving legislation, policies and practices in relation to such crimes. The study is unique, as it is the first report in Georgia to assess criminal proceedings relating to crimes of sexual violence in the context of the Istanbul Convention and human rights standards.

Nino Lomjaria, Public Defender of Georgia, Natalia Voutova, Head of the Council of Europe Office in Georgia and Lela Akiashvili, Advisor to the Prime Minister on Human Rights and Gender Equality Issues, delivered welcome speeches at the event.

According to the key findings of the study, the rate of reporting the cases of sexual violence is still low in Georgia and justice is administered only in a small number of cases. During the 2-year reporting period (from June 2017 to May 2019), 361 reports of sexual violence were received by the police. Investigation was launched in 251 cases, although verdicts were delivered only in 26 cases. Of these, 20 people were found guilty of committing sexual violence, while 6 were acquitted. Sexual violence has not been recognized as a form of discrimination against women in any of the cases.

In addition, the definitions of sexual violence in the Criminal Code of Georgia (Articles 137-139) are not based on the lack of free or voluntary consent of the victim, as required by international human rights standards.

The standard of evidence is quite restrictive and tough in relation to cases of sexual violence; the perpetrator is not held accountable unless the testimony of the victim is supported by evidence obtained from various sources. Such standards contradict the requirements of human rights instruments and lead to the impunity of perpetrators.

The lack of female forensic experts often hinders the examination of the victim. The lack of an examination report in most cases means that the investigation will not continue and the perpetrator will not be held accountable. And during criminal proceedings, victims are often asked degrading questions, which may harm their dignity, question credibility and cause secondary victimization.

The study was presented by lawyer Tamar Dekanosidze. Nino Tsatsiashvili, Deputy Minister of Internal Affairs, Natia Merebashvili, Deputy Prosecutor General, Giorgi Chekhani, Executive Director of the Bar Association and Elene Gvinjilia, representative of the Analytical Department of the Supreme Court of Georgia, spoke about the current situation and challenges in the country. Council of Europe expert Joanna Evans spoke about the practice of the United Kingdom relating to sexual violence and consent-based sexual violence legislation. The online conference was moderated by the Deputy Public Defender of Georgia, Ekaterine Skhiladze.

The meeting was attended by representatives of governmental and non-governmental sector, local and international organizations.