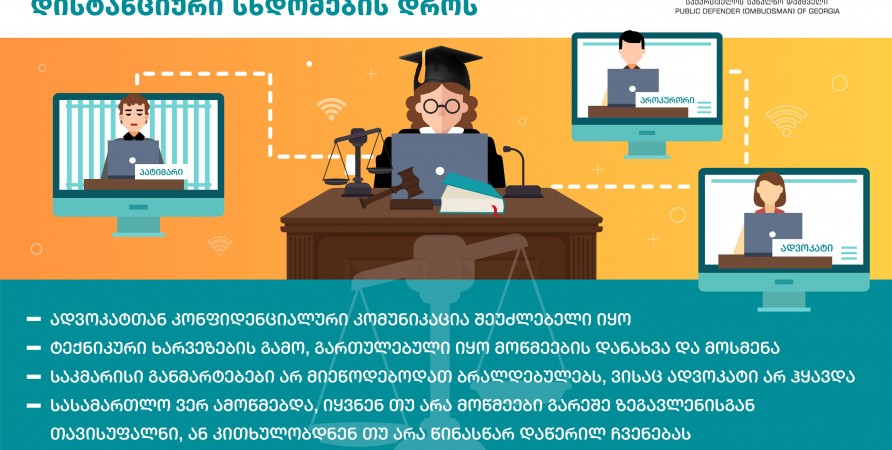 During the pandemic, the remote administration of criminal justice and electronic court hearings became the subject of Public Defender’s particular attention. From May 18 to June 22, the Public Defender’s representatives attended 279 remote hearings in 21 district and city courts. The monitoring, which used special methodologies and questionnaires, revealed a number of substantial problems.

First of all, significant part of remote hearings (16%) started more than an hour late. The main reason for the late start or postponement of the hearings was the infrastructure of the penitentiary establishments. Substantial technical problems relating to sight and hearing hindered the normal course of the hearings and in some cases led to the postponement.

Remote hearings have also become a significant challenge in terms of realizing the right to a fair trial. The vast majority of defendants did not the opportunity to have confidential communication with the lawyer. During questioning, the court often failed to verify the credibility of witnesses. It was even problematic to see or hear witnesses due to technical deficiencies. The quality of translation was also poor in some cases.

The Public Defender hopes that if criminal hearings are again held remotely, all technical and legal deficiencies, which significantly damaged the rights situation of the accused, will be eliminated and the judiciary will be prepared for a similar challenge.

The report includes recommendations to the Parliament of Georgia on the need for special regulation of the rules of questioning of witnesses during remote hearings. The High Council of Justice has also been recommended to ensure technically the confidential communication between the lawyer and the accused during remote hearings.