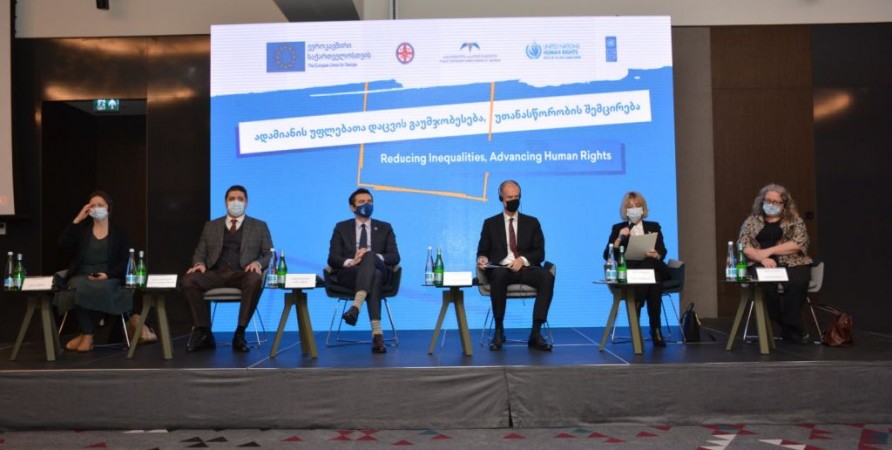 On December 10, 2021, on the occasion of the Human Rights Day, a human rights forum was held to discuss inequalities that jeopardise democracy in Georgia and hamper Georgia’s progress towards a fair and just society. The event was initiated and supported by the European Union (EU), the United Nations Development Programme (UNDP), the South CaucasusOffice of the High Commissioner for Human Rights (OHCHR)and the Public Defender’s Office.

The message of this year’s Human Rights Day is: "All human, all equal". The forum discussed three main areas where pandemic has particularly deepened social and economic challenges: 1. gender equality, 2. legal and social protection of the LGBTQI+ community, and 3. inclusion of ethnic and religious minorities.

"In 2021, the issue of equality remained a challenge. The protection of the rights of women, persons with disabilities, LGBTQ+ community and ethnic and religious minorities has not improved significantly. The events around Tbilisi Pride Week in July were of particular concern, when law enforcement agencies failed to respond properly to violence against members of the LGBTQ+ community and journalists. Those who called for violence and committed acts of violence have not been brought to justice," Georgian Public Defender Nino Lomjaria said in her speech.

Members of Parliament of Georgia and representatives of state agencies, Public Defender's Office and leading non-governmental organizations took part in the discussion.

Ekaterine Skhiladze, Deputy Public Defender of Georgia, spoke about the need for economic empowerment of women as one of the main preconditions for the protection of human rights, including the strengthening of gender equality.

Ketevan Shubashvili, Head of the Equality Department of the Public Defender's Office, discussed anti-discrimination policies and access to health care and social services in the context of the LGBTQ human rights.

Beka Mindiashvili, Head of the Tolerance Center of the Public Defender's Office, spoke about the rights of ethnic and religious minorities, their civic involvement and participation.

The Human Rights Forum is one of the concluding events of this year's Human Rights Week. During the week, the European Union, the United Nations and the Public Defender’s Office reaffirmed their commitments to promoting human rights principles that are safeguarded by the Georgian Constitution and major policy documents. Respect for and protection of human rights is the basis of important international treaties and formats such as Georgia's Association Agreement with the European Union and achievement of the Sustainable Development Goals.