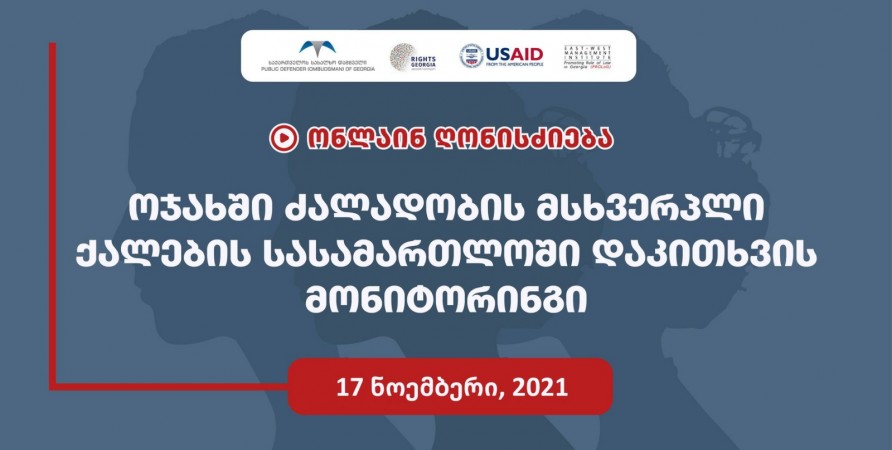 On November 17, 2021, the Public Defender of Georgia and the non-governmental organization Rights Georgia presented the findings of the monitoring of questioning of female victims of domestic violence in court.

The event was attended by representatives of the legislative, executive and judiciary branches of government, embassies, international organizations, academia and civil society.

The special report is based on the results of the monitoring of trials in the Tbilisi and Rustavi City Courts in a period from May to August 2021, during which the project researchers observed the questioning of female victims of domestic violence in 30 criminal cases.

The monitoring revealed the following major problems: The questioning of women victims of domestic violence often takes place in a situation that does not ensure the prevention of secondary victimization of the affected women. In addition, affected women are not fully informed of their rights or support services, nor are they provided with adequate legal aid.

According to the special report, the risks of secondary victimization of female victims come particularly from those accused of violence and their lawyers. In some cases, during questioning, lawyers' questions and remarks were irrelevant or accusatory, and were also offensive and derogatory. It is noteworthy that the infrastructure of courts does not ensure the avoidance of physical or verbal communication between the victim of violence and the abuser or his representative. In addition, the Georgian Criminal Procedure Code does not provide for the possibility of removing accused persons from the courtroom during interviewing female victims of violence in order to protect them from psychological pressure and secondary victimization.

In addition, witness and victim coordinators or victims’ lawyers were virtually not involved in the questioning process. An essential problem is that Georgian legislation does not provide for the possibility of free legal aid in criminal proceedings for adult female victims of domestic violence or domestic crime.

The document also includes recommendations for the Parliament, Supreme Court, Prosecutor's Office, Georgian Bar Association and Legal Aid Service, which concern legislative reforms to improve the rights of female victims of domestic violence, retraining of professionals working in the justice sector and improvement in the court infrastructure.

When preparing the special report, the Rights Georgia and the Public Defender’s Office were supported by the USAID programme Promoting Rule of Law in Georgia (PROLoG) that is being implemented by the East-West Management Institute (EWMI).