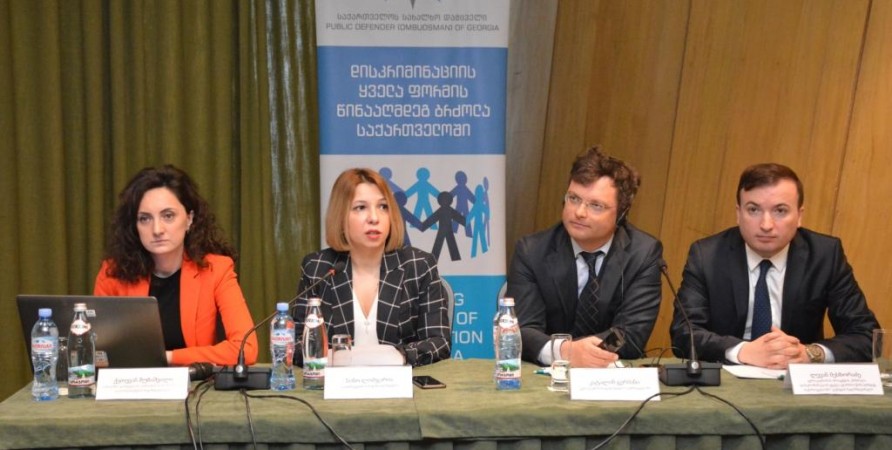 Special Report on the Situation of Equality

On 5 March 2019, Public Defender Nino Lomjaria presented a special report on the situation of equality in the country.

At the opening of the event, the Public Defender noted that the enactment of the Law on the Elimination of All Forms of Discrimination facilitated discussions about the issue of equality and at the same time, it more clearly portrayed the problems faced by vulnerable groups. The Public Defender emphasized the necessity of taking appropriate measures by the state for overcoming widespread stereotypes and misconceptions.

In the reporting period that lasted from September 2017 to August 2018, the Public Defender's Office studied 159 cases of alleged discrimination; recommendations were issued in 21 cases and general proposals were developed in 9 cases. The highest rate of addressing the Public Defender in connection with alleged discrimination was again related to the public sector (69%), like the previous year.

For the purpose of disseminating information about equality issues, the Public Defender's Office organized trainings and information meetings with 40 employees of the Ministry of Internal Affairs, 200 employees of local self-governments, 51 teachers of public schools, 70 journalists, 120 employees of private companies, 30 members of trade unions, 30 labour inspectors and 50 representatives of non-governmental organizations.

It should be noted that the Public Defender's Office became a member of the European Network of Equality Bodies (Equinet) in November 2018. Members of the network are EU member states, while Georgia is the first Eastern Partnership country that has been allowed to become a member of the organization.

Videos about important issues of equality, prepared on the initiative of the Public Defender, were presented at the event.

The presentation of the special report was supported by the EU Delegation to Georgia and was attended by representatives of the diplomatic corps, international and local NGOs and state agencies.