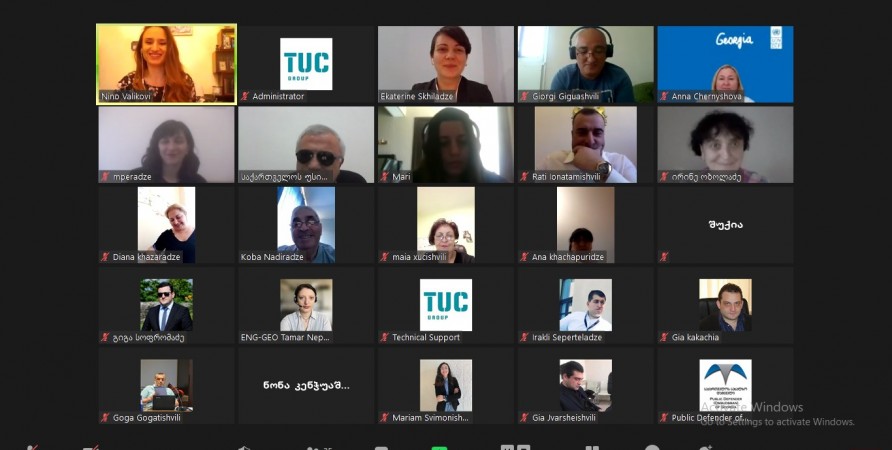 Online Meeting - Involvement of People with Disabilities in Decision Making: Practices and Challenges

On June 14, 2021, on the initiative of the Public Defender of Georgia and with the support of the United Nations Development Programme (UNDP), an online meeting was held to discuss the participation of people with disabilities in the decision-making process.

"The participation of people with disabilities in the decision-making process remains a significant challenge in Georgia. The main slogan of the Convention "Nothing About Us Without Us" is often still non-implemented.

"Our discussion aims to identify obstacles in the country and to find ways to resolve them, to lay the foundation for the practice of promoting quality and equal participation, which is a prerequisite for proper protection of the rights of persons with disabilities," - said Public Defender Nino Lomjaria.

Anna Chernyshova, Acting Resident Representative of the United Nations Development Programme, Maka Peradze, Head of the Human Rights Secretariat of the Government of Georgia, and Rati Ionatamishvili, Deputy Chairman of the Legal Affairs Committee of the Parliament of Georgia, also delivered opening speeches.

Nino Valikova, Deputy Head of the Department of the Rights of Persons with Disabilities of the Public Defender's Office of Georgia, Giga Sopromadze, Executive Secretary of Tbilisi City Hall’s Council for Persons with Disabilities, Koba Nadiradze, Executive Director of the NGO Equal Opportunity Center, Olga Kalina, Chairperson of the Georgian Network of Psychiatric Service Users and Survivors, and Mari Korkotadze, representative of the NGO Families Against Discrimination, presented reports on the challenges relating to the participation of persons with disabilities. The event was moderated by Deputy Public Defender Ekaterine Skhiladze.

The meeting and the subsequent discussion were attended by people with disabilities, representatives of the Public Defender's Office, state agencies, international organizations and local NGOs working on the rights of persons with disabilities.