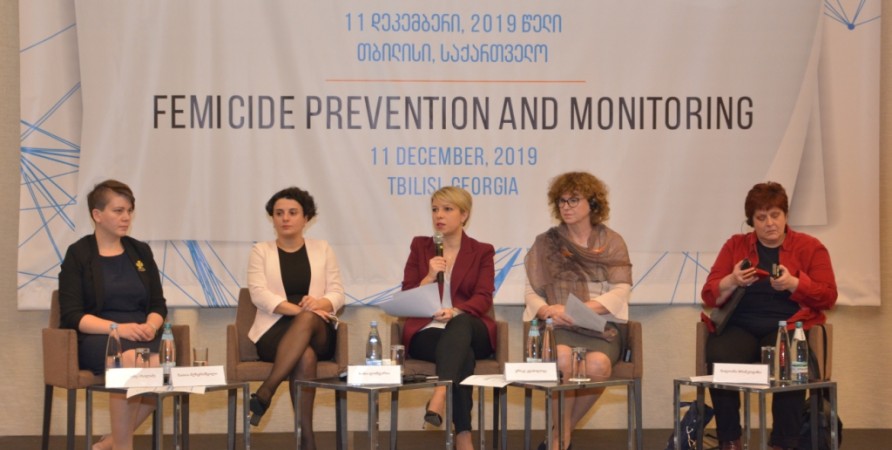 Conference on Prevention and Monitoring of Femicide

Conference on Prevention and Monitoring of Femicide was held with the support of the Public Defender of Georgia and UN Women on 11 December 2019. The purpose of the conference was to discuss the systemic problem and the most extreme form of the killing of women.

Welcome speeches were delivered at the conference by Nino Lomjaria, Public Defender of Georgia, Erika Kvapilova, first UN Women Representative in Georgia, and Natia Mezvrishvili, Head of the Administration of the Government of Georgia.

Biljana Brankovic, a member of the GroupofExpertson Action againstViolence against Women and Domestic Violence(GREVIO), spoke about the importance of monitoring the cases of femicide, international scope of the problem of femicide and preventive measures.

Deputy Public Defender Ekaterine Skhiladze moderated the session, the theme of which was the situation of prevention and monitoring of femicide.

Maka Peradze, Deputy Director of the Department of Human Rights and Monitoring of the Quality of Investigation at the Ministry of Internal Affairs, Kristine Morgoshia, Prosecutor of the Human Rights Department of the Prosecutor General’s Office, and Maka Kvachadze, Head of the Analytical Department at the Supreme Court of Georgia, delivered speeches at the session. The main findings of the study were presented by expert Giorgi Gotsiridze.

According to the findings of the study, due to the lack of uniform statistics methodology, various agencies’ statistical data on gender-related killings of women are often contradictory or different from each other, which complicates coordination between the agencies. In view of the above, the report does not reflect the results of quantitative research and the statistical information contained therein was obtained from the information requested from the courts.

The main findings of the report show that it is still problematic for the court to assess a case as femicide or attempted femicide. Even when gender motives are identified, this is not reflected in aggravating circumstances of the punishment. Accordingly, it is important for the Prosecutor's Office to take appropriate measures to identify gender motives in the murders or attempted murders of woman.

In the final part of the conference, the Public Defender of Georgia summarized the key issues of the conference. According to her, despite the decline in the rates of femicide, complex efforts are important during examination of cases in order to address systemic shortcomings.

The meeting was attended by representatives of state agencies, international and local organizations, as well as international missions accredited in Georgia.