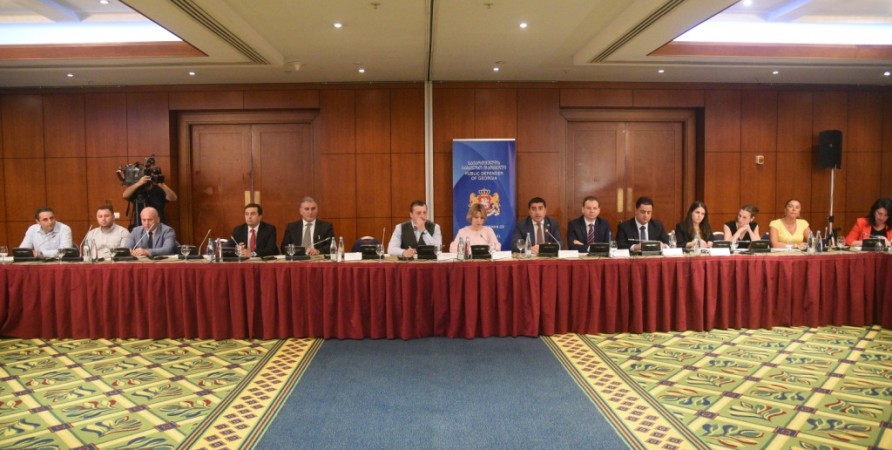 On July 11, 2022, the Public Defender of Georgia organized a public discussion of the findings and recommendations of the report on the ad hoc monitoring carried out by the European Committee for the Prevention of Torture (CPT) in the penitentiary establishments of Georgia.

The ad hoc visit was conditioned by specific circumstances, including and primarily by the report published by the Public Defender in 2020, which referred to informal governance in the penitentiary system and frequent cases of inter-prisoner violence.

In her opening remarks, the Public Defender of Georgia spoke about the importance of the recommendations of the European Committee for the Prevention of Torture and thanked the organization for its activities in Georgia. She also noted that the findings of the Committee's report were actually identical to the problems indicated in the Public Defender's reports. The findings include the prison criminal subculture reflected in the annual reports of the Public Defender, shortage of staff and their low qualifications, lack of rehabilitation services and the need to establish a fair and transparent parole mechanism.

According to Shalva Papuashvili, Speaker of the Parliament of Georgia, the reports and recommendations of the European Committee for the Prevention of Torture and the Public Defender of Georgia will help the penitentiary system improve its work; He expressed satisfaction with the fact that violence in prisons no longer has a systemic character and spoke about the supervision of the reforms in the penitentiary system by the Parliament.

Deputy Minister of Justice Tornike Cheishvili emphasized the challenges in the penitentiary system and the readiness to solve them; He reviewed the planned legislative changes and spoke about the importance of focusing on the recommendations of the European Committee for the Prevention of Torture and the Public Defender of Georgia.

The monitoring report was presented by Borys Wodz, head of the CPT division responsible for visits. According to him, it is difficult to control large prisons, especially given that more than a thousand prisoners are controlled by 20-30 employees in some of the institutions. He noted that Georgian prisons do not ensure reasonable differentiation of inmates based on their criminal record and the possibility of correction (recidivists and first-time offenders are placed together).

He also spoke about improper living conditions, saying that some prisoners repair their cells, buy furniture and equipment, but other cells are in a very bad condition. Nor is the quantitative distribution equal - different numbers of prisoners live in cells of the same size.

Borys Wodz emphasized the lack of opportunities for engagement in activities. The vast majority of prisoners have nothing to do nor the opportunity to get an education that would have helped them avoid criminal subculture. The inadequate level of treatment of persons with mental health problems is also clearly visible.

Deputy Public Defender Giorgi Burjanadze reviewed the activities of the National Preventive Mechanism of Georgia and noted that the main task of the Office was to find ways to solve problems. He spoke about the necessary changes, including the common issues referred to both by the European Committee for the Prevention of Torture and the Public Defender of Georgia, such as dividing the penitentiary system into relatively small institutions and creating a balanced infrastructure, reducing the number of prisoners, shortage of staff, their working conditions, operational capabilities and accountability.

He singled out the issue of rehabilitation, noting that prisoners do not see the importance of engaging in activities, since the most important thing for them - parole mechanism is flawed and constant unjustified decisions cause their just dissatisfaction. The Public Defender thinks that improving the parole mechanism and focusing more on individual characteristics when making decisions would be a simple and quick method of encouraging prisoners to engage in rehabilitation activities. At the same time, this change would also reduce the influence of criminal subculture.