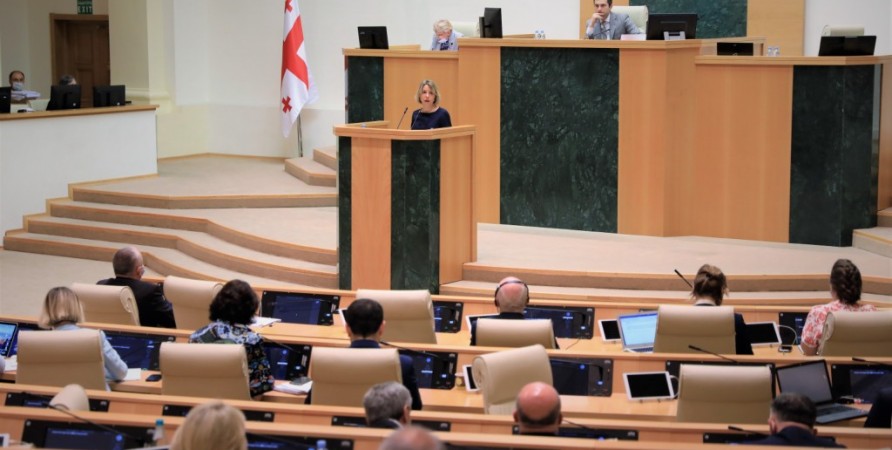 On June 23, 2021, Public Defender Nino Lomjaria presented a report on the human rights situation in Georgia in 2020 at the plenary sitting of the Parliament of Georgia and briefly reviewed the thematic directions reflected in the report.

The Public Defender began her speech by talking about children's rights, speaking in detail about the child poverty and its consequences, the rights situation of children living in the Ninotsminda orphanage; domestic violence and particularly disturbing cases of sexual abuse; shortage of social workers and psychologists; lack of a strategy and action plan for the elimination of child suicide; risks of long-term remote learning without proper technical support; children living and working on the streets and the fact that the dangers they face have been further increased during the pandemic.

With regard to the protection of the right to life, the Public Defender spoke about the death cases of prisoners who had health problems, which revealed the inadequate quality of health care in the penitentiary system. She emphasized the inadequate treatment for somatic (physical) health problems of persons placed in psychiatric hospitals, leading to the death of patients in some cases. She also reviewed the shortcomings in the investigations of the murder of Giorgi Shakarashvili and Temirlan Machalikashvili, as well as minors on Khorava Street. The Public Defender noted that the rate of ill-treatment of persons detained for administrative offences by the police has increased.

Due to the informal governance in the penitentiary system, at different times in 2020 and 2021, in Establishments Nos. 15, 8 and 17, a group of prisoners did not allow representatives of the Public Defender to conduct monitoring.

According to the Public Defender, the practice of placement of prisoners (including juvenile defendants) in the de-escalation and solitary confinement rooms for a long time, often for the purpose of punishment and wihtout justification, represents ill-treatment.

The living conditions in some psychiatric facilities, frequent cases of physical violence and verbal abuse, both by the staff towards patients and among patients, equal ill-treatment. The practice of tranquilization and the use of physical and chemical restraints instead of treatment also equal inhuman and degrading treatment.

In the chapter on the right to freedom and security, the Public Defender focused on curfew, as well as the difficulties encountered by the quarantined and isolated persons in terms of appealling against restrictions. She noted that the mechanism for early release of prisoners was not working properly either.

Speaking of fair judiciary, the Public Defender emphasized the extremely disturbing violations detected in the selection process of Supreme Court judges and the lack of transparency of the rules for the appointment/election of judges, as well as gaps in the remote trials, problems with ensuring prompt and effective justice. She reviewed the cases of Lasha Tordia, Giorgi Rurua and Nikanor Melia, as well as the so-called cartographers’ case.

In terms of freedom of expression, the events developed around Adjara TV, obstruction of journalists' professional activities and ineffective investigation of crimes committed against journalists were underlined; the Public Defender also stressed the increased number of cases of unjustified and disproportionate interference with ​​freedom of expression and assembly.

In the direction of environmental protection, challenges relating to the energy policy were identified in 2020, as well as neglect of human rights in urban development and problems with hazardous waste management. The internal gas network safety monitoring mechanism and ambient air quality monitoring system are faulty. The report also assesses the developments surrounding the Namakhvani HPP cascade project.

The pandemic has worsened situation in the health care sector; delayed hospitalization-treatment in October-November 2020 and the death of patients in some cases were particularly problematic.

The rights situation of medical personnel is the gravest. According to the 2019 studies, support medical staff work more than 40 hours and 84.6% of them receive a salary of less than GEL 500, while 100% of them do not receive overtime pay either on working or non-working days. The population does not have access to cheap medicines, especially after health care prices increased by 9.7 % in the last one year.

With regard to the human rights situation in the occupied territories, the report refers to the restrictions on freedom of movement at the so-called checkpoints, resulting in the death of certain persons due to the lack of access to medical services. The report also reviews illegal arrests, including the cases of Zaza Gakheladze, Vazha Gaprindashvili, Genadi Bestaev, Irakli Bebua, Ramaz Begheluri, Mirian Taziashvili and Khvicha Mghebrishvili; attempts to swim across the Enguri River in order to reach Zugdidi, which resulted in the death of several people; restrictions on getting education in the mother tongue and the decrease in the number of first graders. The report says that prisoners are often beaten, ill-treated and tortured in temporary isolators and prisons in the occupied territories.

Women, religious minorities, members of the LGBT+ community and persons with disabilities still face the biggest barriers in terms of realization of the right to equality. In 2020, the Public Defender reviewed 113 cases of alleged discrimination, identifying discrimination in labour relations, discrimination against journalists and sexual harassment. The investigation and prevention of alleged hate crimes remains one of the main problems.

A positive development in terms of gender equality was the introduction of a parliamentary gender quota mechanism. However, the following still needs to be addressed: the difference in the average incomes of men and women, increase in the number of cases of femicide, flawed legislation. The rate of detection of trafficking cases and the number of people using services are low. The practice of early marriage and engagement remains a challenge; The anti-crisis economic plan did not reflect the social and economic needs of LGBT+ people.

As of the end of 2020, there were 288,146 IDPs and 91,023 internally displaced families registered in Georgia. Some of them still live in facilities that pose an increased threat to life and health.

The report discusses the importance of preventing eco-migration, as well as the rights situation of stateless persons and people with temporary residence permits.

The issue of Gelati and the endangered monuments of Batumi Urban Heritage, Khada Gorge and Davit-Gareji Monastery Complex are discussed in the chapter on cultural heritage.

The report reflects the measures taken in the field of human rights education.

The following remained problematic for national minorities: full realization of the right to education, condition of cultural monuments, involvement in political processes, access to the media, especially during the pandemic, access to information in a language they can understand, etc.

In terms of freedom of belief and religion, the tax law, state property legislation, enjoyment of property rights and the approach to religious holidays are discriminatory. The ineffectiveness of investigations of alleged hate crimes, as well as the publicly made anti-Semitic and religiously discriminatory statements, are also problematic.

The report also focuses on the remuneration of conscripts and the living conditions of military personnel. 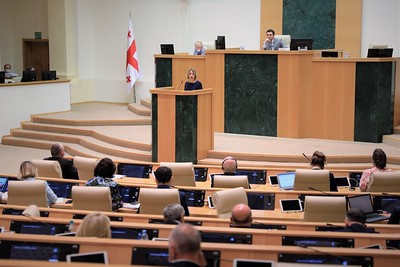